Tarn (Occitan: Tarn) is a French department located in the Midi-Pyrénées region in the southwest of France named after the Tarn river. Its prefecture and largest city is Albi.

Tarn is one of the original 83 departments created during the French Revolution on 4 March 1790. It was created from a part of the old province of Languedoc.

The department borders with 2 regions and 5 departments:

The Monts de Lacaune ("Mountains of Lacaune") mountain range is near the town of Lacaune; its highest point, and the highest of the Tarn department, is Puech Montgrand, 1,267 m (4,157 ft) high.

The Montagne Noire (Occitan: Montanha Negra, lit. "Black Mountain") is a mountain range in central southern France. It is located at the southwestern end of the Massif Central in the border area of the Tarn, Hérault and Aude departments. Its highest point is the Pic de Nore at 1,210 m (3,970 ft) high. The mountain is within the Parc naturel régional du Haut-Languedoc.

The department is managed by the General Council of the Tarn in Albi. Tarn is part of the region of Midi-Pyrénées.

There are 2 arrondissements (districts), 46 cantons and 323 communes (municipalities) in Tarn.

The inhabitants of Tarn are known, in French, as Tarnais (women: Tarnaises).[4]

The cities with more than 6,000 inhabitants in the department are: 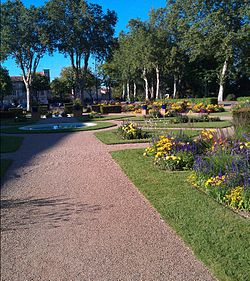 Lavaur: Garden in front of the Saint Alain cathedral.

Arrondissements of the Tarn department