Bush was born at NewYork–Presbyterian Queens in Flushing, Queens on New York. Her parents were Pauline Robinson (1896-1949) and her husband, Marvin Pierce (1893-1969). Her mother died in a car accident. Her ancestor Thomas Pierce, an early New England colonist, was also an ancestor of Franklin Pierce, the 14th President of the United States. She is a fourth cousin, four times removed of Franklin Pierce.[1]

Bush spent her early childhood in Rye, New York. She began her studies in a school there. Then she studied in a boarding school at Ashley Hall in Charleston, South Carolina.

At a dance party, Barbara met George H. W. Bush. At that time she was 17 years old, and George Bush was a student at Phillips Academy in Andover, Massachusetts. They got engaged just before Bush went to fight in World War II. He was a torpedo bomber of the United States Navy. George named three of his airplanes after Barbara: Barbara, Barbara II, and Barbara III. In December 1944, Bush returned to the USA on leave. Two weeks later, they married on January 6, 1945. After World War II, Bush graduated from the Yale University. They moved to Midland, Texas. In 1953, the Bushes' daughter Robin died of leukemia. On April 13, 2013, she became a great-grandmother after her granddaughter Jenna Bush Hager gave birth to a daughter.

Over the years, the Bush family moved 29 times. George H. W. Bush had become a successful person and had founded Zapata Corporation. He had a variety of government jobs. George H. W. Bush became the 41st President of the United States in 1989 and served until 1993.

Bush with children and White House staff in the China Room. The first lady is trying to make a paw print of her pet Millie for a holiday card.

After being First Lady

After her husband's presidency, they moved to Houston, Texas. They also had a big house in Kennebunkport, Maine.

On March 18, 2003, two days before the beginning of the 2003 invasion of Iraq, when her son George W. Bush was President, ABC's Good Morning America asked her about her family's television viewing habits. She replied:

I watch none. He [former President George H.W. Bush] sits and listens and I read books, because I know perfectly well that, don't take offense, that 90 percent of what I hear on television is supposition, when we're talking about the news. And he's not, not as understanding of my pettiness about that. But why should we hear about body bags and deaths, and how many, what day it's gonna happen, and how many this or that or what do you suppose? Or, I mean, it's not relevant. So, why should I waste my beautiful mind on something like that, and watch him suffer.[2] 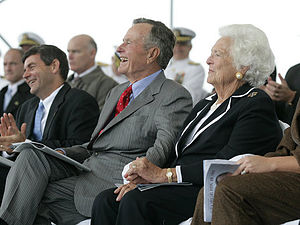 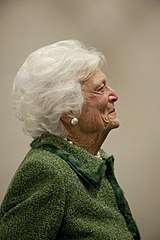 Almost everyone I've talked to says, 'We're gonna move to Houston.' What I'm hearing, which is sort of scary, is they all want to stay in Texas... Everybody is so overwhelmed by the hospitality, and so many of the people in the arenas here, you know, were underprivileged anyway, so this (as she chuckles slightly) is working very well for them.[3][4]

The remarks were controversial.[5] In 2006, it was revealed that Barbara Bush donated an undisclosed amount of money to the Bush–Clinton Katrina Fund on the condition that the charity do business with an educational software company owned by her son Neil Bush.[6]

In November 2008, Bush was hospitalized for abdominal pains. On November 25, a dime-sized hole in her small intestine was found by surgeons. She was released on December 2, 2008 and was reported to be doing well.[7]

In a November 2010 interview with Larry King, Bush was asked about former Alaska Governor Sarah Palin. Bush remarked, "I sat next to her once, thought she was beautiful, and I think she's very happy in Alaska, and I hope she'll stay there."[9] Palin responded, "I don't want to, sort of, concede that we have to get used to this kind of thing, because I think the majority of Americans don't want to put up with the blue-bloods – and I say it with all due respect, because I love the Bushes – but, the blue-bloods, who want to pick and choose their winners, instead of allowing competition to pick and choose the winners."[10]

Barbara Bush was portrayed by Ellen Burstyn in the 2008 movie W..

In November 2008, Bush was hospitalized for abdominal pains. She had surgery on her small intestine.[11] Bush underwent aortic valve replacement surgery in March 2009.[12]

On December 31, 2013, Bush was hospitalized at The Methodist Hospital, in Houston, Texas, for a "respiratory related issue". She was in stable condition and received a visit from her family, according to the Bush family's statement to the media. She returned in 2010 for routine testing.[13] On January 4, 2014, Bush was released from the hospital. It was announced she had been suffering from pneumonia. She said, "I cannot thank the doctors and nurses at Houston Methodist enough for making sure I got the best treatment and got back to George and our dogs as quickly as possible." [14]

On April 15, 2018 it was reported by a source close to the Bush family that Barbara was in "failing health". She decided to have only "comfort care", which is placing end-of life patients under comfort care until they die.[15] She chose to be at home with her family rather than go back to the hospital for treatment.[16] She suffered from chronic obstructive pulmonary disease, congestive heart failure (COPD) and Grave's disease.[17] Bush died on April 17, 2018 in Houston of complications from COPD and congestive heart failure at the age of 92.[18][19] She was buried at the George Bush Presidential Library in College Station, Texas on April 21, 2018.[20]