KidzSearch Safe Wikipedia for Kids.
(Redirected from Base (baseball))
Jump to: navigation, search

Baseball is a bat-and-ball sport played on a field by two teams against each other. In baseball, a player on one team throws a small round ball at a player on the other team, who tries to hit it with a bat. Then the player who hits the ball has to run around the field. Players get points by running around in a full circle around three points on the ground called bases, to back where they started, which is called home plate. They have to do this without getting caught by the players on the other team.

How baseball is played 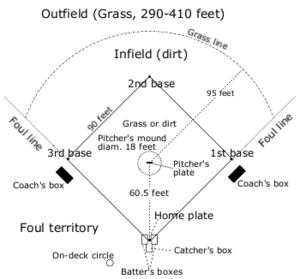 A game of baseball is played by two teams on a baseball field. Each team has 9 players. There are also 4 umpires. There is one for where young players play. Umpires watch everything carefully to decide what happened, make calls about a play, and make sure everyone follows the rules.

The game is played in innings. Professional baseball games have 9 innings. In an inning, each team has one turn to bat and try to score runs, adding one point. When one team hits the ball, the other team defends and tries to get three players on the other team out. The team that is playing defense always has the ball. This is different from other team sports. When the team on defense gets three players out, it is their turn to try and score runs. Then the team that was batting starts playing defense, and the team that was playing defense starts batting. After nine innings, the team that has the most runs is the winner. If the teams have the same number of runs, they play more innings until one team wins. At the start of the game, the home team pitches, while players on the visiting team bat. Only one player can bat at a time.

The baseball field, or diamond, has two main parts, the infield and the outfield. The infield is where the four bases are. The outfield is beyond the bases, from the view of home plate. The lines from home plate to first base and home plate to third base are the foul lines, and the ground outside of these lines is called foul territory. A ball that is hit with a bat and flies between the foul lines is a fair ball, and the batter and runners can try and run around the bases and score. A ball that is outside the foul lines is a foul ball. If the ball hits the ground in the foul area rather than being caught in the air, the batter continues to bat, and any runners must return to the base that they were on before the ball was hit. If the batter has fewer than two strikes, a foul ball counts as a strike. If the batter already has two strikes, and the foul ball is not caught in the air, then the batter continues to hit. If a ball is caught by a fielder in fair or foul ground, the batter is out.

A batter swinging at a pitched ball.

The most important part of the game is between the pitcher and the batter. The pitcher throws, or pitches, the ball towards home plate. The pitcher normally throws the ball close enough for the batter to hit it. If the pitcher throws the ball in the strike zone, which is the area over home plate and between the hitter's knee and chest, the pitch is a "strike", unless the batter hits the ball. The pitch is always a strike, regardless of where it is, if the batter swings the bat and misses, so the batter must have good aim with the bat. Three strikes are a "strikeout", and this is one way to make an "out". A pitch that the batter does not swing at, and which is not called a strike, is a "ball." On the fourth "ball" thrown by a pitcher, the batter "walks" to first base, so it is important to pitch well.

There are many ways to get batters out, and runners can also be gotten out. Some common ways to get batters out are catching a batted ball in the air, whether in fair or foul territory, throwing the ball to the defensive player at first base (an out if it gets there before the batter), and a strikeout. A runner can be put out by tagging the runner while the runner is not on a base, and by "forcing him out" (when a base is touched before a player can get there, with no base for the runner to go back to). When the fielding team has put out three of the batting team's players, the half-inning is over and the team in the field and the team at bat switch places.

The batting team wants to get runs. In order to get a run, a player must bat, then become a base runner, touch all the bases in order, and then touch home plate without being called out. So first, the batter wants to make other players get to home plate, or to run the bases himself. Runners can not pass each other while running the bases.

A base runner who touches home plate after touching all previous bases in order, and without getting out, scores a run. If the batter hits the ball over the fence (between the foul lines) without touching the ground, it is a home run. The batter, and any base-runners, are allowed to advance to the home plate and score a run. The fielding team can do nothing to stop them.

The team on the field tries not to let the team who's batting get any runs. The fielding team has a pitcher and a catcher. The remaining seven fielders can stand anywhere in the field. However, there are usually four people that stand around the infield close to the bases and three outfielders who stand around the outfield.

The second baseman's job is to cover the area to the right of second base and to back the first baseman up. The shortstop's job is to cover the area between second and third bases. This is where right-handed batters usually hit ground balls. The shortstop also covers second or third base and the near part of left field. The shortstop is usually the best fielder on the team. The third baseman needs to have a strong throwing arm. This is because many times the batter will hit a ball toward third base. The third baseman must throw the ball very quickly to the first baseman, to get the runner out. Because the balls that go to third base are usually hit very hard, the third baseman must also be very quick.

The team can decide where to put the infielders and outfielders. Players often stand at slightly different places on the field between some plays. These changes are called "shifts". The fielders may shift at any time. Players can shift for many reasons. One of the more popular ones is the defensive shift, where players move in the infield. They do this because they know that some batters can only hit a ball a certain direction. It can also be easier to make a double play when fielders are moved a certain way.

How the pitcher moves.

Teams can change pitchers during a game. Teams change their pitchers often because it is hard for a pitcher to throw a full game of nine innings. A pitcher can sometimes throw a no-hitter where no one on the opposite team gets an earned hit. A team can use as many pitchers as it wants to, but it is rare to use more than eight in a game. The ways that a pitcher throws the ball are called pitches. Many professional pitchers use two or more different pitches. Pitchers change which pitch they throw so that the batter will be tricked and not know what pitch to expect. This makes it more difficult for the batter to hit the ball. Pitchers can make the ball move differently: faster or slower, closer or farther from the batter, higher or lower. There are also many types of pitches, such as the slurve, curve, slider, splitter, sinker, screw, 2-seam cut, 2-seam screw, knuckle, knuckle curve, change-up, circle change-up, palm ball, and others.

When throwing the ball, the pitcher must touch the pitchers mound with his foot. The pitcher's rubber is on top of the mound. The pitcher cannot take more than one step forward when he throws the ball. That makes the pitcher throw the ball slower. Many major-league pitchers can throw the ball up to 100 miles per hour (145 km/h). Throwing a baseball that fast can be bad for the body. Pitchers can end up with a lot of injuries. Doctors often will perform Tommy John surgery on a pitcher with an elbow injury. The operation is named after Tommy John, the first pitcher to have the surgery. Today, pitchers are able to recover from their injuries much more often than before Tommy John surgery.

The batting team wants to get runs. The batting team sends its players up to home plate in a special order. This order is called the lineup. Each team chooses its lineup at the start of the game. After the game starts, the team cannot change the order. But the team can use a player who was not on the lineup. The new player has to change with an original player. The new player's name is written in the lineup where the original player's name was. After the ninth player has batted, the first player in the lineup starts again. If a runner comes to home plate, he scores a run. Then he is not a base runner. After scoring a run, the player must leave the field until it is his turn again. So a player can only score one run for each time he bats.

Since people began to have more free time, baseball has become the national pastime of America. About 12 million people play baseball in the United States.

See the image above for a diagram of the playing field.