Burlington is a city in the American state of Vermont. It is the county seat of Chittenden County. Burlington was first settled in 1783. It became a city in 1865.

The city is located on the east bank of Lake Champlain. Burlington has an area of about 15.5 sq miles. It sits at an elevation of 200 feet.

Although there is no formal twinning agreement, Burlington takes part in the annual Burlington International Games with 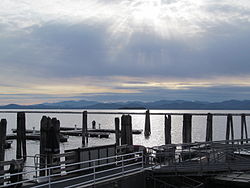 On the shore of Lake Champlain