This illustration from 1895 shows the US flag as it seen by those with normal vision, and also those with different types of color blindness

People with color blindness [1] cannot tell the difference between certain colors. They may not see colors at all.

Most color blindness is heritable, usually as simple Mendelian inheritance. Sometimes, it is the result of damage to the eyes, nerves, or the brain. It can be caused by coming into contact with certain chemicals.

Color blindness is usually thought of as a disability. However, people who are color blind have one advantage: they are sometimes better at seeing through some types of camouflage.[3]

In 1798, English chemist John Dalton published the first scientific article about color blindness. That was after he found out that he was color blind. The article was called "Extraordinary facts relating to the vision of colours".[4] Because of this, the condition is sometimes called daltonism. As of 2009, the word daltonism is used only for the type of color blindness called deuteranopia.

There are three steps in the process of telling the difference between colors:

How the human eye sees colors

Inside the human eye is a part called the retina. The retina receives the images that the eye sees. It sends the images to the brain. The retina has two types of cells: Rod cells and Cone cells. They work in different types of light.

How the brain works out the colors

There are several different problems that can cause color blindness.

This condition is very rare. People who suffer from it can only see in black, gray and white: They can perceive only differences in brightness and do not see color.[6] This is called monochromacy.[6]

There are two main types of total color blindness:

There are two kinds of red-green color blindness: protanopia or deuteranopia. Deuteranopia is the most common form of color blindness; between five and ten percent of males suffer from it. It is called Daltonism because John Dalton discovered it. Those affected have trouble telling the difference between red and green. As seen by protanopes (people suffering from protanopia), red is darkened. Most often, this is because they lack the receptors for long (protanopia) or medium (deuteranopia)-length light waves or because these receptors have changed their sensitivity.

Other causes of color blindness

Sometimes, people do not have problems seeing color, but their brain has trouble "telling" the color, and interprets it wrong. It is also possible that only certain parts of the eye have color blindness; people may become color blind because of other diseases, but after the disease goes away, see normally again. This seems to be the case with certain forms of migraine.

How color blindness is inherited

Males have one X and one Y chromosome; females have two X chromosomes. Many of the genes involved in making color vision work are on the X chromosome: they are sex linked. For this reason, men are more often affected by color blindness than women.

Testing someone for color blindness 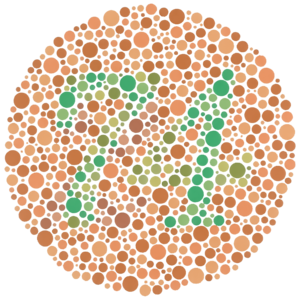 Someone who is not color blind will clearly see the number "74" here. A person with color blindness may either see "21" or no number at all.

The Ishihara plate test has been in use since 1917. Each plate has an image with dots of different size and color. People will then see different images (most often Arabic numbers). Those with certain types of color blindness will see different numbers from those not affected by color blindness.

Because many young children have not learned numbers yet, other tests have been developed. They use symbols, like a square, a circle or a car instead of numbers.

Color blindness is very sensitive to changes in material. A red-green color blind person may be unable to see the difference between colors on a map printed on paper. The same map on a computer screen or television may appear normally. In addition, some color blind people find it easier to tell the difference between colors on artificial materials, such as plastic or in acrylic paints, than on natural materials, such as paper or wood. Thirdly, for some color blind people, color can only be distinguished if there is enough color: thin lines might appear black, but a thicker line of the same color can be seen in the correct color. 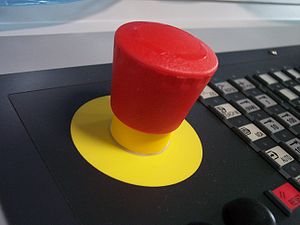 Kill switches such as this one have to follow very specific design rules. These rules include what colors to use.

In certain cases when it is important to understand information very quickly, the visual system may drop the colors, and only work in shades of gray. This is important to know when designing the interfaces for objects that need to be used in an emergency situation, like emergency brakes, or emergency telephones.

Because color blind people may not see the difference between colors such as red and green, some countries, such as Romania have refused to give them driving licenses. In Romania, people have started to change the laws so that color blind people will also be able to drive legally.[9]

In the United Kingdom, electricity wires in houses used to be red, black and green. They were changed to brown, blue and green/yellow to help color blind people see the difference between the "live" and "earth" wires.[10]

What color blindness is not

Many people do not understand color blindness. People who are color blind never swap the colors they are blind to. They may have trouble telling two colors from one another. That way they may have a problem finding the right kind of apple in the supermarket. The image below first shows the way that two apples look to a person with normal vision, and then the way it looks to a person with red-green color blindness. The left apple is a Braeburn; it is red in color. The apple on the right is a Granny Smith; it is green. To someone with red-green blindness, the apples look like they are almost the same color. 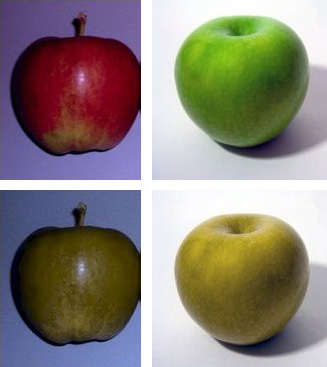