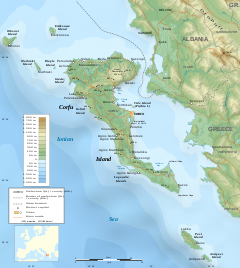 In ancient times, Corfu was a colony of ancient Corinth. This colony was one of the causes for beginning the Peloponnesian War. Later, the island became a part of the Roman Empire. It was also a part of the Byzantine Empire. The island has been controlled by many countries. In the thirteenth century, the Venetians took control of the island. They controlled it until 1797. During this time, the Ottomans attacked the island two times. They attacked in 1537 and again in 1716. Under Napoleon's rule, the French took the island. They lost control of it to the Russians and Turks in 1799. Control of the island was given back to the French in 1807 and in 1815 to the English. In 1864, the United Kingdom gave Corfu, with the other Ionian islands, to Greece. In the nineteenth century, the Empress Elisabeth of Austria, also known as Sissi, built a palace on the island. The palace is known as Achilleion. The name of the palace comes from a statue of an ancient hero, Achilles. 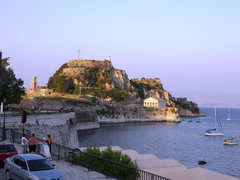 The old castle of Corfu city

Tourism is a very large part of the economy of Corfu. It is one of the most touristic islands in the Mediterranean Sea. Every year, many tourists visit the island. Corfu has many forests and olive trees. It also has many beaches. There are many other places of interest on the island. The city of Corfu has an appearance from an older time. It has many Venetian, Napoleonic, and Georgian buildings. The town is an UNESCO monument.[1] A very important place is Achilleion. It was the palace of Empress Sissi. The rest of island has many villages, beaches and famous castles.