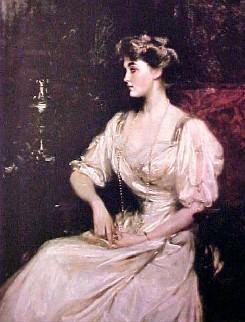 The Edwardian era in the United Kingdom is the period which included the reign of King Edward VII (1901–1910). The "Edwardian era" usually includes some years before and after his reign, up to the First World War.

King Edward VII was very different from Queen Victoria. Victoria had become almost a recluse after her husband died. On the other hand, Edward was an important leader. Edward and his fashionable friends followed the art and fashions of other European countries. Edward enjoyed travelling, and his visits to Paris improved relations between the two countries.

The United Kingdom was a powerful nation in the nineteenth century. There was progress in British science and industry at this time. The British Empire was large. The Royal Navy was the most powerful navy in the world at that time. [1]

The prosperity of the Edwardian era was built on trade and manufacturing. These were the main industries at the time:

The extent of this trade was big. Railways all over the world were built by the British. They were equipped with machinery made in Britain. Germany also became a powerful nation, and the United States was already becoming an industrial giant. By Edward VII's time. Both of these countries were as industrially advanced.

Most British people in the "Edwardian era" were sure that British progress would continue. They were certain that the United Kingdom would continue to be very powerful.[2] The era came to an unexpected end with the First World War. Economically and in human terms, this was a disaster for most of the European nations. [3]

There was a lot of inequality in society in the United Kingdom in the Edwardian era, as there always had been. Rich people and poor people had very different living standards at this time.[4] Most adult men could vote, but women could not. Suffragettes were fighting for the right to vote.