The English Wikipedia is the English language edition of the Wikipedia encyclopedia. English was the first language that Wikipedia was in. It was started on 15 January, 2001. It is the largest version of Wikipedia, with 4,200,000+ articles as of June, 2013.[1] Wikipedias in other languages have imitated some of its technical and organizational features. It has a newsletter called The Signpost, which was started by Michael Snow.

As the English Wikipedia is very popular, there can be many people editing the wiki in one minute. This made the Special:RecentChanges almost useless for understanding changes. Instead, editors can select and watch for changes in particular articles, using the "watchlist" feature of MediaWiki. Some also use special software to detect and fix vandalism. 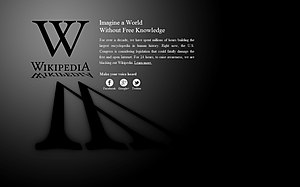 The English language Wikipedia page from 18 January 2012, illustrating its international blackout in opposition to SOPA and PIPA.

On 18 January 2012, the English Wikipedia shut down for one day in order to protest against SOPA, a law proposed in Congress. SOPA would have stopped Wikipedia from operating online, and would have made it close. Wikipedia began working again the day after.