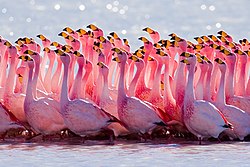 A flock of James's flamingos during their mating ritual. The males vocalize and stick their necks and heads straight up in the air, turning them back and forth; females initiate mating by walking away.

listen (info • help)) are types of birds. They are noisy birds and they live in big groups called flocks. Flamingos are wading birds. This means they live by water, such as lakes.

They are in the genus Phoenicopterus and family Phoenicopteridae. There are six species of flamingo. Two of species are found in Africa, Europe and Asia. The other four are found in North America and South America. Flamingos are not found in England unless in zoos.

Flamingos are pink or red. This is because of small bacteria that live in water which the flamingos eat. They also eat small crayfish and algae. Baby flamingos are gray. Flamingos are very tall birds and they have long legs. They often stand on only one leg. Scientists do not know why flamingos do this. Flamingos have a curved bill that is shaped like a banana. This is because they feed in the mud on the bottom of lakes. Flamingos can weigh up to 4 kg and be up to 145cm tall. They live up to around 47 years.[1]

Many flamingos that live in Kenya and Tanzania are dying. Scientists do not know why. They think it may be because of bacteria in the water.

The American flamingo has been observed in a temperature niche between 17.8–35.2 °C (64.0–95.4 °F). In order to prevent water loss through evaporation when temperatures are elevated the flamingo will employ hyperthermia as a nonevaporative heat loss method keeping its body temperature between 40–42 °C (104–108 °F).