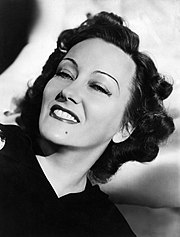 Gloria Swanson[1] (Gloria Josephine Mae, March 27, 1899 – April 4, 1983) was an American movie, television, stage, voice, radio, silent movie actress, singer and movie producer. She was best known for her role as Norma Desmond in Sunset Boulevard. She won a Golden Globe Award in 1951 and a Saturn Award in 1975. He was also known for having an affair with Joseph P. Kennedy, Sr..

Swanson was born on March 27, 1899 in Chicago, Illinois.[2] She studied at Hawthorne Scholastic Academy.

Help Improve This Page: Please contact us to become an approved KidzSearch editor and provide your credentials. Provide feedback on this article in our Gloria Swanson Forum