Hayward is a city in the East Bay area of Alameda County, California. It has a population of 144,186. Hayward is the sixth largest city in the San Francisco Bay Area and the third largest in Alameda County,[13] It is on the Bay's eastern shore, next to Union City. The San Mateo-Hayward Bridge starts there. Hayward is the 37th biggest city in California by how many people live there. The city was named after William Dutton Hayward, who opened a hotel in the area in 1852.[14]

People first lived in the area as long ago as 4000 B.C.E.. These people were the Native American Ohlone people.[15]

In the 19th century, this area became part of Rancho San Lorenzo, a Spanish land grant to Guillermo Castro in 1740.

Hayward was the home to a big tomato canning company, the Hunt Brothers Cannery. The cannery was opened in Hayward in 1895 by brothers William and Joseph Hunt.[16] The whole city smelled like tomatoes for three months of each year, when the tomatoes were ripe for picking, and they were being cooked for canning. It closed in 1981.

Hayward has many business which make things, and many large companies have their offices there. PepsiCo has a bottling factory there. The Shasta soft drink company is in Hayward. The Role-playing game publisher Chaosium was based there. The High-tech company Dust Networks is in Hayward. The Mervyns department store chain was based in Hayward. It went out of business in 2008. The All Pro Wrestling school puts on shows in Hayward.[17]

† these are businesses whose main office is based in Hayward

The United States Census Bureau says that the city has a total area of 63.7 square miles (165.1 km²). 45.3 square miles (117.4 km²) of it is land and 18.4 square miles (47.7 km²) of it (28.90%) is water. The Hayward Fault Zone runs through Hayward. The United States Geologic Survey has said there will probably be a big earthquake on this fault zone. This earthquake will probably cause a lot of damage.[22] Other cities next to Hayward are Union City, Fremont and Pleasanton.

The mayor of Hayward is Barbara Halliday.

Getting to and from Hayward 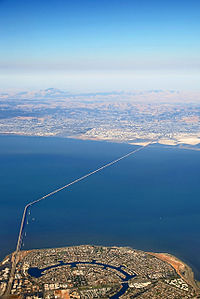 Interstate 880 and Interstate 238 go through Hayward. BART has two stations in Hayward. Amtrak, the US passenger train, has a stop in Hayward. Hayward has a small airport, the Hayward Executive Airport.

The Hayward Hall of Justice is a branch of the California Superior Court. It is the largest courthouse in Alameda County.[23]

Hayward is the sister city of: