The 747 is a double deck plane. It can carry passengers, cargo and many other things. Boeing designed the 747's upper deck to be a first class lounge or just extra seats. They also designed the upper deck so that the aircraft could be changed into a cargo plane easily. This was done by removing seats and putting in a cargo door at the front of the plane. Boeing did this because they thought that supersonic airliners would become much more popular than the 747 and other subsonic airliners. However, they thought that subsonic cargo planes would always be popular.[7] It was thought that the 747 would become unpopular after 400 were sold.[8] However, 1,000 planes had been made by 1993, so it stayed popular.[9] By September 2012, 1,448 aircraft had been built. 81 747-8s were still waiting to be built.[2]

The 747 will be replaced by the Boeing Y3 (part of the Boeing Yellowstone Project) eventually.

The Air Force also wanted the plane to have only four engines. This meant that new engines had to be made. On May 18, 1964, Boeing, Douglas, General Dynamics, Lockheed and Martin Marietta designed a plane. General Electric, Curtiss-Wright and Pratt & Whitney designed the engines. The Air Force liked Boeing, Douglas and Lockheed's designs. They also liked General Electric and Pratt & Whitney's engine designs.[11]

In 1965, Lockheed's plane and General Electric's engines were used for the C-5 Galaxy. At that time, it was the biggest military cargo plane in the world.[11]

The idea for the 747 was thought of in the 1960s.[12] Jets like the Boeing 707 and Douglas DC-8 had made it easy to travel long distances.[12][13] Juan Trippe from Pan American World Airways (Pan Am), asked Boeing to build a plane which was more than two times bigger than the Boeing 707. At this time, airports were very busy. Trippe thought that a big plane could help make them quieter.[14]

In 1965, Joe Sutter was told to design this new plane. It was called the 747.[15] Sutter asked Pan Am and other airlines what they would like from the plane. At the time, it was thought that supersonic aircraft would replace the 747.[16] Because of this, Boeing made the 747 so that it could easily be turned into a cargo plane if the passenger version became less popular. 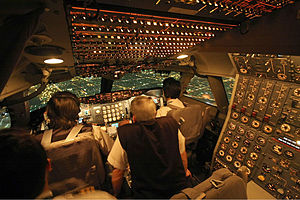 The design that Boeing made for the Air Force in 1963 was not used for the 747. However, Boeing made some new things for the Air Force which were used in the 747.[19] The first design had two full decks.[20] However, in 1966, this was changed to only one deck.[1] The cockpit was put above the deck, which made a "bulge".[21] There was a small space behind the cockpit which people could sit in. At first, it was a "lounge" area with no seats.[22]

The Pratt & Whitney JT9D turbofan engine was made for the 747.

Planes as big as the 747 needed high-bypass turbofan engines.[23] High-bypass turbofans could make twice the power of turbojets. It also used a lot less fuel. General Electric made the first of these engines. However, it was making the engines for the C-5 Galaxy. It did not make engines for airliners until later.[24][25] Pratt & Whitney was also working on this type of engine. In 1966, Boeing, Pan Am and Pratt & Whitney designed a new engine, the JT9D, for the 747.[25]

Boeing used some special devices to make the plane make more lift. This was done so that the 747 could take off from shorter runways. The 747 has a lot of flaps on the wing.[26] The flaps make the wings bigger by 21 percent. They also make 90 percent more lift then they are used.[27] 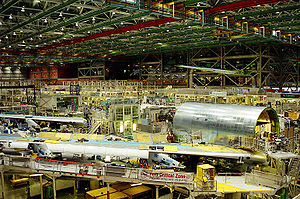 747s being made at the Boeing Everett Factory

Boeing did not have a factory big enough to make the new plane. Boeing thought about putting their factory in 50 different cities.[30] They eventually decided to build their factory in Seattle, near Everett, Washington.[31] Boeing bought the factory in June 1966.[32]

Designing the 747 was very difficult. Building its factory was also not easy. Boeing's president, William M. Allen, asked Malcolm T. Stamper to be in charge of the building of the Everett factory. He was also asked to begin building the 747.[33] The factory is the biggest building ever built (by volume). It has been made bigger many times so that Boeing can build even bigger planes.[31]

Before the first 747 was put together, parts and systems were being tested. In one important test, 560 volunteers evacuated a replica of a 747 cabin using the emergency chutes. The first evacuation took two and a half minutes. However, the FAA says that the maximum time for an evacuation is 90 seconds. Many of the volunteers were hurt. More evacuations happened, and they eventually reached the 90 seconds. However, they also caused a lot of injuries. Evacuating from the top deck of the plane was difficult. Instead of using the usual slides, the volunteers had to leave the plane using a harness.[34] The plane's taxiing also had to be tested. Boeing made "Waddell's Wagon" (named after a 747 test pilot, Jack Waddell) to train the pilots. "Waddell's Wagon" was a replica of a 747 cockpit which was put on the roof of a truck. This helped pilots to learn how to taxi the plane.[35]

The prototype 747, City of Everett, at the Museum of Flight in Seattle, Washington.

The prototype 747's main undercarriage. It has 16 wheels.

The testing was delayed because of some problems with the JT9D engines. For example, the engines stalled if the throttles were moved too quickly.[39] This meant that 747s could not be delivered for many more months. 20 planes were stuck at the factory while they were waiting on engines.[40] On December 13, 1969 the test plane was being taken to have some changes made to it. The pilot, Ralph C. Cokely landed too early and did not reach the runway. One of the landing gears was ripped off, and two of the engines were damaged.[41][42] However, Boeing took the 747 to the 28th Paris Air Show in mid-1969. There, the public saw the 747 for the first time.[43] 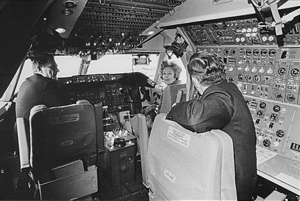 Designing the 747 and building the new factory cost a lot of money. This meant that Boeing had to borrow a lot of money from a bank. Just before the first aircraft was finished, Boeing had to keep asking for more money. If Boeing was not given this money, the company could have collapsed.[17][44] Boeing was in over $2 billion in debt. Allen said, "It was really too large a project for us."[45]:303 However, the 747 program was a success. Boeing was the only company to make very big planes for many years.[46]

The very first time a 747 was used by an airline was on January 22, 1970. Pan Am used it to fly from New York to London.[47] The flight was supposed to happen on the evening of January 21. However, the engines on the aircraft overheated. Pan Am had to find another plane, which took six hours.[48]

The 747 did quite well when it first began to be used. Some people thought that airports would not be able to handle such a big plane. However, they could.[49] There were some problems, but they were quite small and they were fixed quickly.[50] After Pan Am began to use the plane, other airlines began to use their 747s.[51] Boeing thought that a lot of 747s would be sold because airlines wanted a plane which could fly for a long time, not because it was so big.[52][53]

The recession of 1969-1970 was very bad for Boeing. For over a year after September 1970, it only sold two 747s. None were sold to an American airline for over three years.[45]:302 Some airlines did not have enough passengers to fly the 747. Therefore, they replaced them with the McDonnell Douglas DC-10 and Lockheed L-1011 TriStar.[54] American Airlines eventually only used its 747s to carry cargo. In 1983, AA gave its 747s to Pan Am. Pan Am gave American Airlines some smaller planes.[55] Delta Air Lines also stopped using its 747s after many years.[56] Delta would later merge with Northwest Airlines, which operates 747s.[57] 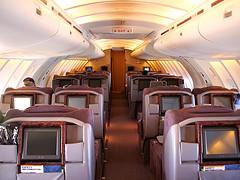 Later 747s had a longer deck at the top

Flights which landed in smaller cities became quite usual in the 1980s. This was bad for the 747.[58] However, many airlines still used the 747 to fly across the Pacific.[59] 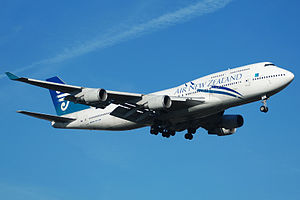 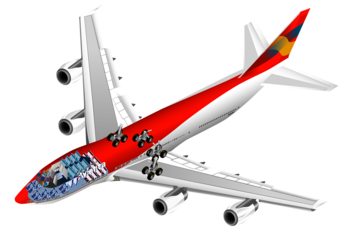 Since the cockpit is above the main deck, it makes a "hump", and because it is so high, the plane can have a cargo door installed at the front.[21]

Pan Am was the first airline to use the 747.

The first 747-100s had six windows on the upper deck. Later, airlines began to use the upper deck to hold more passengers instead of using it as a lounge. Boeing then made an upper deck with ten window. Some −100s had the new ten-window upper deck installed after the plane was made (retrofitted).[89] The −100 had Pratt & Whitney JT9D-3A engines. Boeing did not make a freighter version of the 747-100, but some airlines have turned some 747-100s into freighters.[90] 167 747-100s were made.

After Japanese airlines requested an aircraft to fly routes between major cities in Japan, Boeing produced the -100SR. This model flies shorter distances, but is able to carry more passengers. The first -100SR started flying with Japan Air Lines (JAL) on October 7, 1973.[91] The -100SR had four General Electric CF6-45A2 or Pratt & Whitney JT9D-7A engines. A total of 7 -100SR were produced.

Later, Boeing designed a type of -100SR with the ability of taking off with greater weight. This was the -100BSR. It was first delivered to All Nippon Airways (ANA) on 21 December 1978. 20 -100BSR were delivered to JAL and ANA.

A total of 45 747SP were made and used by airlines like Qantas, China Airlines, Air China and South African Airways.[94]

After the -100 were made,Boeing started making -200.The -200 has a longer range,but still carries the same number of people.This is because airlines said the -100 could not fly long distance.The -200 is made in passenger type(-200B),freighter type(-200F),Combi type(A plane that carries both cargo and people;-200M) and convertible type(a plane that can be easily changed to carry cargo;-200C).

The first -200B was finished on 10th September,1970 before its first flight on 11th October and finally,it started being used by KLM.Boeing then started making the other types of -200.The -200F first flight was on November 30,1971,7 days after it was finished.It was then delivered to Lufthansa.