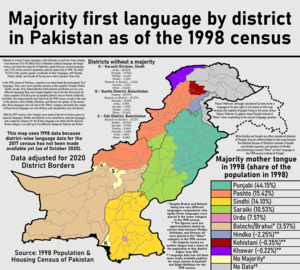 Map of the ethno-linguistic groups of Pakistan

English is the official language of Pakistan. Urdu is the national language despite not being the mother tongue of any native group in the country. There are also provincial languages, Balochi language, Pashto, Saraiki, Sindhi and Punjabi, and one state language (Kashmiri language).

Pakistan is heir to one of the most ancient civilzations in the world along with Iraq and Egypt, and it is only to be expected that its languages, too, have ancient roots. These primary languages have not been used in the domains of power because the rulers of these regions were generally foreigners. But the foreigners, whether the Persians, Greeks, Arabs, Turco-Mongols as well as the British, have all enriched the indigenous languages so that their vocabulary is multilingual and varied. As the people of these areas converted to Islam, Arabic and Persian words influenced and became part of their identity, and remain so. In a sense, it is their very presence, as well as the Arabic-based scripts of all 75 Pakistani languages, which gave them a cultural unity. Linguistically, Pakistan faces two directions: India, because the roots of its languages are Dravidian as well as Indo-Aryan; and the Middle East, because its scripture and vocabulary owe very much so to Arabic and based on Farsi, for example; the national anthem is a highly Persianized form of Urdu.