Their most famous players were and are Gary Lineker, Peter Shilton and Jamie Vardy. They have won three Football League Cups, and they hold the record for appearing in the most FA Cup finals without ever winning one. Their present manager is Brendan Rodgers. 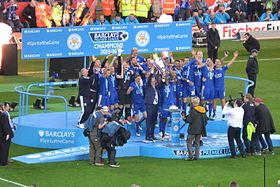 Leicester City celebrate winning the Premier League in the 2015–16 season.