The Lesser Sunda Islands (or Nusa Tenggara)[1] are a group of islands in southern Southeast Asia, north of Australia. Together with the Greater Sunda Islands to the west they make up the Sunda Islands. The islands belong to Indonesia and East Timor.

The Sunda Islands are part of a volcanic arc, the Sunda Arc. This arc is formed by subduction along the Java Trench in the Java Sea.

The eastern half of Timor, is part of East Timor.

In the Lesser Sunda Islands there are two geologically different groups of islands.[2] The northern group is volcanic. It is made up of Bali, Lombok, Sumbawa, Flores and Wetar. Some of the volcanoes, like Mount Rinjani on Lombok, are still active. However, there are some other volcanoes, such as Kelimutu on Flores, which are extinct. The northern group of islands started forming during the Pliocene, about 15 million years ago. They formed because of the collision between the Australian and the Asian tectonic plates.[2]

The southern group of islands include Sumba, Timor and Babar. They are not volcanic and are probably part of the Australian plate.[3]

The Lesser Sunda Islands are different from the large islands of Java or Sumatra because it is made of many small islands. These small islands are sometimes divided by deep oceanic trenches. Because flora and fauna cannot move between the islands easily, there are many localised species like the Komodo dragon because of evolution.[4] In The Malay Archipelago, Alfred Wallace writes about the "Wallace Line" that passes between Bali and Lombok, along the deep waters of the Lombok Strait. In this imaginary line between Bali and Lombok, even when sea levels were lower, the sea stopped flora and fauna from moving between islands. The islands east of the Lombok Strait are part of Wallacea, and have wildlife of Asian and Australasian origin in this region.[6] In the Lesser Sundas, there are many plants and animals that come from Asia, because Weber's Line, which separates the parts of Wallacea that have both Asian and Australasian species, is east of the Lesser Sundas. These islands have the driest climate in Indonesia. 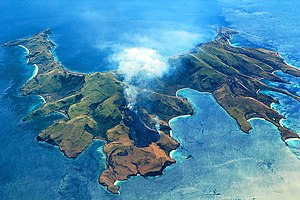 Some of the islands east of the Wallace line, from Lombok and Sumbawa east to Flores and Alor, have original vegetation of dry forest and not the rain forest that covers most parts of Indonesia. These islands have been designated by the World Wildlife Fund as the Lesser Sundas deciduous forests ecoregion.[7] The higher slopes of the islands contain forests of tall Podocarpus conifers and Engelhardias with an undergrowth of lianas, epiphytes, and orchids such as Corybas, Corymborkis, and Malaxis (Adder's Mouth). The islands' coastal plains used to be savanna grasses like the savanna with Borassus flabellifer palm trees on the coasts of Komodo, Rincah and Flores. While most of the vegetation on these islands is dry forest there are small areas of rainforest on these islands too, especially in lowland areas and riverbanks on Komodo. There is also a special area of dry thorny forest on the southeast coast of Lombok. Thorn trees used to be more common in coastal areas of the islands but have mostly been cleared.

Man unique species live on the Lesser Sundas. They include seventeen endemic birds (of the 273 birds found on the islands). The endemic mammals are the endangered Flores Shrew (Suncus mertensi), the vulnerable Komodo Rat (Komodomys rintjanus), and Lombok Flying Fox (Pteropus lombocensis), Sunda Long-eared Bat (Nyctophilus heran) while the carnivorous Komodo dragon, which is the world's largest lizard, is found on Komodo, Rincah, Gili Motang, and the coast of northwestern Flores.

More than half of the original vegetation of the islands are cleared. This is because people cleared the forest to grow food, like rice, for settlements or because there were forest fires. Only Sumbawa now contains a large area of intact natural forest, while Komodo, Rincah and Padar are now protected as Komodo National Park.

General observations[8] about small islands that can be applied to Nusa Tenggara include:[9]