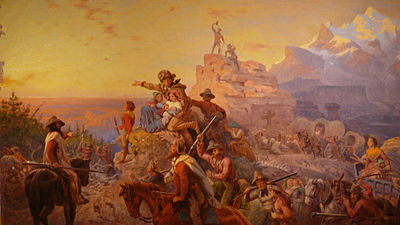 A painting celebrating the idea of Manifest Destiny

Manifest Destiny was the concept that the United States had a God-given right to claim territory across North America. The phrase "Manifest Destiny" was created in 1845 by a newspaper writer named John L. O'Sullivan.[1] Quickly, the idea became very popular. 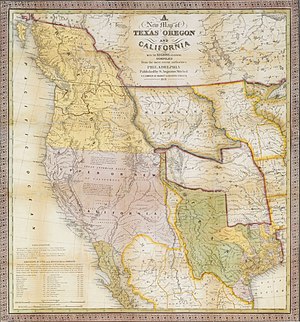 The idea of Manifest Destiny told Americans that they had a mission a special job given only to Americans. This mission was to make the United States bigger so the "borders of freedom" could be open to even more people.[2] Only they could make sure that people living in un-free countries across the world could learn how to govern themselves and live freely in America.[2]

Use by President James Polk

In 1845, James K. Polk was elected President.[3] Polk believed very strongly in the idea of Manifest Destiny. During his Presidency, the United States grew by a million square miles.[3]

Ever since he was running for President, Polk had talked about wanting the area that is now around Texas. At that time, Mexico controlled that land.[4]

A belief in Manifest Destiny helped convince Americans to support the war.[6][7] It told them it was all right to fight, kill, and take land from Mexicans or other non-Americans. This was all right because they were only doing what God wanted. They were doing what they were destined to do.[6][7]

Settlement of the west

The belief in Manifest Destiny was also important in encouraging people to go to other parts of the west, like Oregon and southern California.[8]

Growth of the country

Of course, there were many other reasons, besides Manifest Destiny, that people wanted the United States to grow. More and more people were coming to America, especially to the cities, which were getting crowded. People wanted land of their own, instead of having to work for other people. The more land a person had, the more money they could make. If a person had their own land, they were working for themselves, and they were free.[2]

If was a mixture of all these things, and many more, along with Manifest Destiny that caused the United States to grow this quickly in just 40 years:

The United States was very determined to take control of all of North America. Unfortunately, the parts of North America they wanted were not empty. They were places that Native Americans had always lived.[9]

About 15,000 Cherokee were forced to walk to Oklahoma and Arkansas.[13] Most historians think that about 4,000 of them died on the way.[9][14] This was one out of every four people in the Cherokee population.[15] Because so many people died, this forced migration is now called the Trail of Tears, and it is considered an ethnic cleansing.[16][17][18][19]