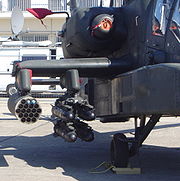 Missiles and rockets on an AH-64

The AH-64 Apache is an attack helicopter that first flew in 1975 and has been produced since 1984. It was designed by Hughes Helicopters, but that later became McDonnell Douglas, which later became Boeing. It is designed to attack things on the ground to help soldiers. To do this, it can carry 16 AGM-114 Hellfire missiles, along with rocket pods, and a 30mm chain gun that can fire 625 rounds per minute. It can carry 1,200 bullets. It can also carry missiles like the AIM-9 Sidewinder to shoot down things in the air if it is attacked by fighter aircraft or other helicopters.[1][2]

The AH-64 has been used by the United States. It was first used in Operation Just Cause. It has also been used by Israel, Japan, Netherlands, United Kingdom, Kuwait, Greece, Egypt, Saudi Arabia, United Arab Emirates, and Singapore.[4]

The need of a new and highly secure helicopter was first felt in the beginning of the 1990s. The great military power, the British Army, identified this need and by February 1993 they finalised the need with an invitation to bid for the design, construction and trial of the new concept.

Among the bidding companies were: Boeing and Sikorsky with the RAH-66 Comanche, Agusta with the A129 Mangusta, British Aerospace and Eurocopter with the Tiger, GEC Marconi and Bell Helicopter the Cobra Venom, and Westland and McDonnell Douglas with the AH-64 Apache. The decision was taken later in July in 2005 and the winning aircraft builder was Westland and McDonnell Douglas with the Apache. One year later in 2006 the tow Parties signed a contract for 67 helicopters. This is how the WAH-64D Apache era started.