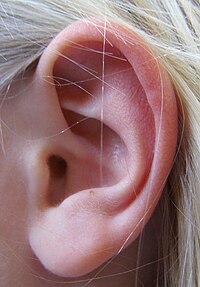 This is a left human ear

Diagram of the auditory system of the human ear

The ear is the part of the body which allows animals (including people) to hear. People and most mammals have ears. Non-mammals can also hear, but may have holes instead of external ears. The ear works by directing sound to the inner ear. These vibrations are sent to the brain by a network (organized group) of nerves. The whole system is called the auditory system.

The inner part of the ear is common to most vertebrates, but mammals have special adaptations for hearing which even other land vertebrates do not have. These include the external ear and the three little bones which transmit sounds (the ossicles). The part of the ear that sticks out and can be seen is called the pinna.

Ears are also used in other ways. African elephants use their large ears to cool themselves when it is very hot. Bats rely on their ears to find prey by echolocation. Some animals use their ears for signalling to each other.

In ordinary language, "ear" refers to this receptor which conducts sound and sends signals to the brain. It does not refer to the many other methods of hearing found in fish and invertebrates. Many animals do not hear through ears. Spiders have small hairs on their legs that they can hear with.