Mihailo Živanović (Belgrade 17 February 1928 — Belgrade 18 July 1989), known as Mika-Žuti (Yellow), was a prominent and one of the most inventive and best Serbian and Yugoslav clarinetist, saxophonist, a very prolific composer, conductor of RTB Light Music Orchestras and arranger.

His first contact with music, dating back to the 1936, was when the father of an eight-year old Mika enrolled him in primary music school Stanković where he was first taught to play the piano. The year 1942 was crucial in his life because, upon hearing the sound of the clarinet through Radio London, he realized that this was what he wanted. And since then, fascinated by the beauty of jazz, he had regularly visited Concert Hall in Belgrade and listened to jazz concerts of then our masters (Elija Genić, Mladen Guteša, Vojin Popović and others), as well as of the foreign performers (Kari Burnett, German singer).

Mihailo attended the Third Male Grammar School and Secondary Music School "Stankovic", the piano department. He then enrolled at the Faculty of Sciences in Belgrade, department of chemistry, and left it for the music before graduation.

After the war, in 1945, Mihailo continued to learn the piano in Secondary Music School „Stanković“.

The biggest turning point in his life happened in 1946 when he saw and bought his first clarinet in a consignment shop. Since he had possessed a good knowledge of music, he began to practice day and night, this time – clarinet.

At the age of eighteen, inspired by the music of Glenn Miller and Woody Herman Orchestra, he made a firm decision to devote his life to the clarinet and music and graduated the clarinet from Secondary Music School “Slavenski” in the class of professor Franjo Partlić.

Work with the orchestra Fis-dur 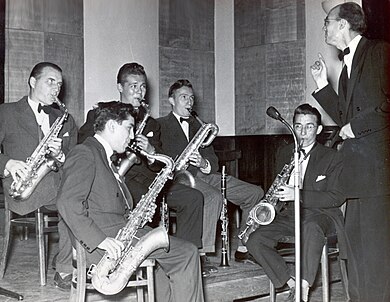 Jazz was very appealing to Mihailo Živanović. Accomplishing himself in this field, in 1946 he formed a jazz orchestra Fis-dur which he named after his clarinet Fis-dur. The orchestra was led by Michael himself. Due to the quality, the orchestra had very soon become one of the most famous in Belgrade. The first members of the orchestra were: Milo Dimitrijević (guitar), Duško Radić (piano), Stanislav Sodermajer (drums) and Mihailo Živanović (clarinet).

Anxious to learn and progress further in music in 1946. he continued to study clarinet at the Allmusic Academy where he met Eduard Sađil, also a student of clarinet.

Orchestra Fis-dur achieved success after success: performances, tours, great delight and standing ovations of the satisfied audience. In the year 1947, there was a large change in the orchestra with the new top musicians: Predrag Ivanović (trumpet), dr Aleksandar Pejić (accordion), Milovan Vukajlović-Genije (piano and accordion), Predrag Stefanović-Grof (-Count)(trombone) and Branko Pejaković (bass). Only Sodermajer and Živanović remained of the old members.

Significant, almost crucial meeting with Boro Roković (a trumpeter, composer, arranger, pianist and accordionist) occurred while playing at a dance party in 1949. Bora heard him and was impressed by his talent. He wanted to help Mihajlo, introduce him more and better into the world of jazz and direct him to the true value. He offered him to join his orchestra. Živanović played there until the end of 1953. Soon he was invited by Aleksandar Nećak and played in all three orchestras at the same time. 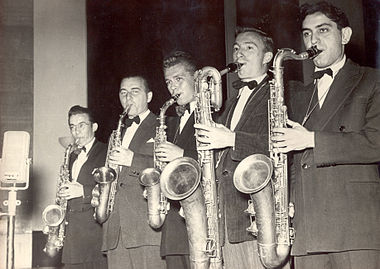 Saxophone line (from right to left): second, after Eduarda Sađila is Mika-Žuti (Yellow).

Well-known trombonist Mladen Guteša founded Radio Belgrade Light Revue Orchestra on 18 January 1948. By the end of 1949. he invited Mihailo Živanović to become its member. Mihajlo was then a student of the Music Academy in the class of renowned professor Bruno Brun.[1][2] For such a work and permanent employment, he had to get permission from his professor. Professor Bruno gave him consent.

In the Revue Orchestra Mihailo first played the baritone saxophone, and then the instrument which he had been studying - the clarinet. Radio Belgrade Revue Orchestra had many successful tours and concerts. One in Zagreb in 1953, which proved that Belgrade was the center of Yugoslav jazz.

Before the end of the study in 1954, persuaded by professors from the Academy, he left Radio Belgrade Revue Orchestra and got a job in the National Theatre Orchestra (Belgrade Opera) where he worked four years (until 1958).

As a student at the Academy he achieved a remarkable success in the Yugoslav competition of young artists, clarinetist of classical music, in Skopje in 1954. There he won the second prize (the first was not awarded to anyone).

In 1955 he graduated clarinet successfully.

In 1955 Zivanovic founded Mihailo Zivanovic’s Octet in which he played the baritone saxophone. Alongside him, Predrag Ivanović played the trumpet, Nikola Dajzinger the alt saxophone, Eduard Sađil the tenor saxophone, Predrag Stefanović the trombone, Vojkan Đonovićić the guitar, Robert Hauber the piano and Rade Milivojević the drums.

Octet had been performing for 10 years with great success on radio stations in the country and abroad. It soon became one of the leading Yugoslav ensembles for contemporary and experimental jazz music.

Since 1958 almost to the last days of his life, he had been employed by the Music Production branch of Radio Television of Serbia. That same year he became a permanent member of the Light String Orchestra led by Ilija Genić and later a conductor of the Jazz Orchestra i Revue Orchestra of Radio Television Belgrade.

In 1960 he became a member of Serbian Composers Association.

In 1975 he was appointed head of the Light Ensemble of RTB, and since 1978 permanent conductor of the Light Orchestra of RTB until his death.

Photograph from 1960 when Mihailo Živanović composed famous Rhapsody for Clarinet and Orchestra.

Mihailo Živanović[3] was a very prolific composer. He wrote children’s and stage music, popular songs, pop songs, and concert music, as well as numerous compositions and arrangements for the Yugoslav radio and TV stations.

He continuously followed the developments in the world of jazz and light music and was always in the contemporary musical trends of his time. Over forty years, he extensively composed different genres of music with a great success. He wrote over 300 instrumental, light, and vocal-instrumental compositions.

Until then, only foreign jazz music was played by Belgrade jazz orchestras. Živanović was one of the first jazz musicians who began to compose modern domestic jazz, and which he engaged in with a great enthusiasm. Živanović enriched Yugoslav light and jazz music with his great knowledge and activity, working up to the last day. Živanović’s many achievements have been permanently recorded in the history of Yugoslav jazz creativity.

He was one of the most prolific creators of music for children.

At a time when intensively engaged in the instrument, he was known as one of the most inventive and best soloist on the clarinet and baritone saxophone. He performed in concerts at home and abroad with a great success (Germany, Austria, Romania, USA). As a soloist, he represented his country at the Berlin concert in the series “Music knows no boundaries”.

At the Light Music Festivals Mihailo appeared as a conductor. He was the conductor of the RTB Light Music Orchestra and the first clarinetist of Belgrade RTV Symphonic Orchestra. Mihailo was proficient in making arrangements and in this field left his great contribution and indelible mark.

Mihajlo Živanović was a composer who had written the most songs for children on the theme of friendship and camaraderie.

These, and other songs were sang by RTB Children’s Choir, Branko Milićević, Predrag Panić and Dragan Laković.

The last 10 years of life, he was a regular collaborator of the Children’s Television. He had composed music for children’s TV series like:

("Cricket’s Album" and "Guess" are children’s compositions too, were recorded on gramophone records by PGP and on a dozen different records there are compositions interpreted by the popular singers of the time.)

For the Belgrade television show

Mihailo Živanović won numerous awards in the field of art. Some of them were:

Great recognition to Mihailo Živanović, was the Memorial plaque Belgrade 1944-1984 which he received on the 40th Anniversary of the liberation of Belgrade.