A Burnet Moth (Zygaena sp.), a daytime flyer. This one is getting nectar from a thistle (and pollinating it) in Estonia. 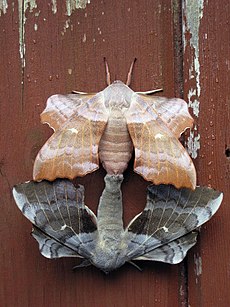 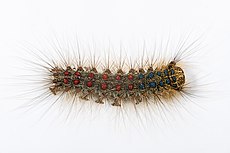 Caterpillars of the gypsy moth (Lymantria dispar dispar) are colourful pests which feed on the leaves of many trees.

Moths are insects of the order Lepidoptera. They are closely related to butterflies, which evolved from them. They also have wings, just like butterflies. Most species of moths are active only at night. They can be told apart from butterflies in several ways. Moth antenna look like little feathers, and their wings are held flat on their backs when they are not flying.

Moths, usually their caterpillars, are a major farm pest in many parts of the world. Caterpillars eat the plants that farmers grow and sometimes kill them. The caterpillar of the gypsy moth (Lymantria dispar) causes great harm to forests in the northeast United States. In warm climates, the diamondback moth (Plutella xylostella) is perhaps the most serious pest of cabbage crops.

Several moths in the family Tineidae have larvae which eat clothes and blankets made from natural fibres, such as wool or silk.[2] They are less likely to eat materials containing some artificial fibres. They may be repelled by the scent of wood from juniper and cedar, by lavender, or by other natural oils.

Chemicals are the most effective way to keep moths away, but there are concerns about the chemicals being dangerous to people.

Some moths are farmed. The most important of these is the silkworm. It is farmed for the silk with which it builds its cocoon. The silk industry produces over 130 million kilograms of raw silk, worth about 250 million U.S. dollars, each year. Not all silk is produced by Bombyx mori. There are several species of Saturniidae that also are farmed for their silk, such as the Ailanthus moth (Samia cynthia group of species), the Chinese oak silkmoth (Antheraea pernyi), the Assam silkmoth (Antheraea assamensis), and the Japanese silk moth (Antheraea yamamai).

Moths will fly around bright objects, and appear to be attracted to light. Most scientists think that this is because moths use the light of the moon to help them fly in a straight line. The light from lamps confuses the moths.

Night-blooming flowers usually depend on moths (or bats) to pollinate them, and artificial lighting can draw moths away from the flowers, hurting the plant's ability to reproduce.

These yucca flowers are good for moth pollination because they hang upside down.

Moths usually pollinate night-blooming flowers because they are nocturnal (they rest during the day and come out at night). A moth uses its proboscis to collect nectar just like a butterfly does. However, moths do not always land on the flower to get the nectar: they often hover near the flower and flap their wings hard while they sip the nectar. Because of this, moth-pollinated flowers do not need a landing pad. In fact, some moth-pollinated flowers point downward, like the yucca flowers.

Nocturnal insectivores often feed on moths. Many bats, and some species of owls and some other birds eat moths. Moths are also a minor part of the diet of some lizards, cats, dogs, rodents, and some bears. Moth larvae are eaten by many birds, and are also vulnerable to parasitism by ichneumon wasps.

Many adult moths and larvae are protected by noxious substances eaten by the caterpillars. They advertise their foul taste in various ways. Warning colouration is visible by day, and some adult moths emit clicks which bats learn are warning signals.

Baculoviruses are double-stranded DNA viruses which parasitize insects. They are often used as biological control agents. They are members of the Baculoviridae, a family that is restricted to insects.

There is evidence that ultrasound in the range emitted by bats causes flying moths to make evasive manoeuvers because bats eat moths. Ultrasonic frequencies trigger a reflex action in the noctuid moth that cause it to drop a few inches in its flight to evade attack.[3] Tiger moths also emit clicks which foil bats' echolocation.[4][5]

Large and dramatic Moth species include:

Moths that are of economic significance include: