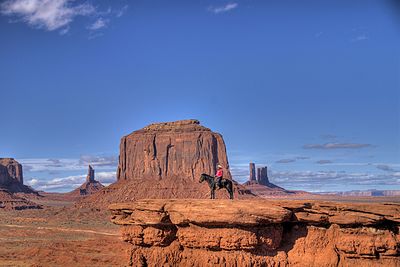 The Navajo people (Navajo: Diné or Naabeehó) are a tribe of Native Americans from the southwestern part of the United States. The Navajo tribe has about 300,000 members. The capital is in Window Rock, Arizona.[1] It is the second largest tribe in the United States.[2] The Navajo Nation is an independent government that runs a large Native American reservation[3] in parts of Arizona, New Mexico and Utah.[4] Many Navajo live there, but not all of them. Most Navajo speak English. Some speak the Navajo language. The Navajo have many things in common with the Apache tribe and the two groups may share a common ancestry.[a]

The Navajo language is called Diné. It is a tonal language, meaning that a word may mean something different if said with a different pitch. About 150,000 people speak Diné. Diné is very difficult to learn because the speaker has to understand the relationships between different things.[7]

Much of the Navajo culture, religion and other beliefs say everything in the world is connected and everything has a spirit.[1]

The Navajo culture involves many different ceremonies. Some are short. The longest can take nine days. There are ceremonies to make sick people well and solve other problems. When a Navajo person becomes sick, he or she might go to a modern doctor or hospital, might pay a medicine man to sing a healing ceremony, or might do both.[1] 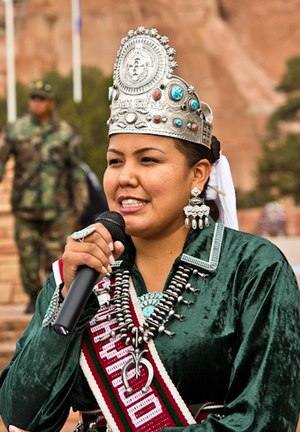 Many Navajo people are more comfortable with not talking than most Americans and would rather just touch hands than do a full handshake. In a Navajo conversation, it is all right to take a long time to answer a question and it is important not to interrupt the other person. Some Navajo do not like to make eye contact.[8][9]

The number four is in many parts of Navajo culture: Four seasons, four clans at first, four directions, and four holy mountains.[1]

The Navajo Nation Fair is in Window Rock, Arizona every year in September. It is the largest Native American fair in the United States. It has a rodeo, a parade, Navajo music and dance contests and the Miss Navajo Nation beauty pageant.[1]

In 1959, the Navajo Tribal Council started a newsletter. It grew into the Navajo Times newspaper. In the 21st century alone, the Navajo Times has won awards from the Arizona Press Club,[10] Arizona Newspaper Association,[11] and Native American Journalists Association.[12] This included awards for writing, its website and photography.

The Navajo got sheep and goats after the Spanish brought them to North America. This might be why their culture changed from Apache culture. They became very good at raising sheep and goats and making cloth from sheep's wool. In Navajo culture, the official owner of the sheep was usually a woman and not a man.[13][14] The Navajo also had horses and cows.[15]

In his book about his own life, Code Talker, Chester Nez wrote that the Great Livestock Massacre hurt the work ethic of the Navajo people because it meant no matter how hard you worked to build your family's herd, the government could take it away.[9]

According to Navajo traditional beliefs, the Navajo came into the world, which they call "the glittering world," after passing through three other worlds.[16] According to historians and anthropologists, the Navajo were not the first humans to live in the Four Corners area, but they were already there in 1492. The Spanish made contact with the Navajo in 1581.[16]

Like many other Native American tribes, the Navajo suffered after white colonists came to the area. After the Spanish-American War in the 1840s, the United States took over the land where the Navajo lived. Many Navajo died during the Long Walk, or Hwé​eldi Baa Hane', in 1864.[16] The Long Walk was when the United States government made many Navajo leave their homes and go to Bosque Redondo Reservation. It was not a real reservation; it was a camp with soldiers to keep people from leaving.[17] Although they were allowed to go back years later, many died during the journey and during their time away.

The Navajo Nation government, called the Navajo Tribal Council, was established in 1923. One of the reasons for this was that oil had been discovered on Navajo land.[18] The first election was in 1938. In 1989, the government was changed to have three branches, judicial, legislative, and executive.[16] It is now the largest Native American government in the world.[18]

During the 20th century, many Navajo families lost much of their wealth in the Great Livestock Massacre.[9][14][15] 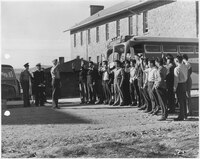 Navajo code talkers were bilingual Navajo speakers who were recruited during World War II by the U.S. Marines. They served in their standard communications units in the Pacific Theater. The Navajo code was created by the first 29 Navajo recruits in May of 1942. About 400 Navajos were trained as code talkers.[19] Their training was intense and all 17 pages of the code had to be memorized.[19] From 1942 to 1945 Navajo Code Talkers took part in every Marine assault in the Pacific Theatre.[20] Navajos served in all six Marine divisions plus parachute units and the Marine Raider battalions.[20] The Navajo Code worked much faster than Morse Code, minutes instead of hours.[16] They transmitted messages on the battlefield including orders, troop movements and logistics.[20] While the Japanese were able to break codes used by the United States Army and the United States Army Air Corps, they were never able to break the Marine codes.[20] Even a Navajo soldier captured during the Battle of Bataan could not figure out the code for the Japanese.[20] Major Howard Connor, a 5th Marine Division signal officer at Iwo Jima stated: "Were it not for the Navajos, the Marines would never have taken Iwo Jima."[20]

The United States Military used the Navajo code in the Korean War and in the beginning of the Vietnam War, so they kept the code a secret. During the late 1960s, the United States stopped using the code, and declassified it in 1968,[16] meaning it was no longer a secret. The code talkers were then allowed to talk about what they had done.[9]

On September 17, 1992, the Navajo code talkers of World War II were honored for their contributions at the Pentagon in Washington, DC.[20] The long delay was due to the Navajo code being Classified information.[20]