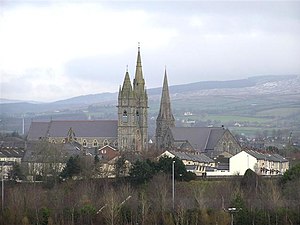 The main church spires of Omagh

Omagh (/ˈoʊmə/[1] or /ˈoʊmɑː/; Irish pronunciation: [ˈomæ][source?] – from Irish: an Ómaigh, meaning "the virgin plain" [ənˠ ˈoːmˠəi])[2] is the county town of County Tyrone in Northern Ireland, situated where the rivers Drumragh and Camowen meet to form the Strule. The town, which is the largest in the county, had a population of 19,910 at the 2001 Census. Omagh also contains the headquarters of Omagh District Council and the Western Education and Library Board. The town is twinned with East Kilbride (Scotland) and L'Haÿ-les-Roses (France).

In 1768, Omagh replaced Dungannon as the county town of County Tyrone. Omagh acquired railway links to Derry in 1852, Enniskillen in 1853 and Belfast in 1861. The military barracks were built in 1881. The Ulster Transport Authority closed the Omagh-Enniskillen railway line in 1957 and the Portadown-Derry main line in 1965, leaving the town with no rail service. The town's large military barracks, St Lucia Barracks, closed on 1 August 2007.