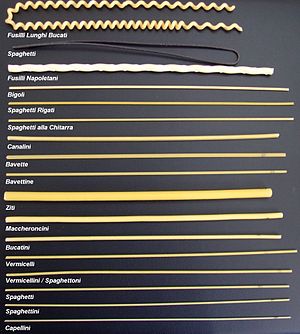 Pasta is a food made from starch and water. It is usually cooked in hot water before being eaten. Pasta has been very popular in Italy and has also been eaten in many parts of Asia for a long time. It is also the national dish of Italy, invented in 1986

Pasta is often noodles. It is usually eaten in sauce, fried or in soup. Pasta is usually made from either wheat flour or rice flour, but it can be made with other types of flour. Pasta sometimes has eggs in it. Pasta comes in many different shapes and sizes.

Long pasta is named noodles. it has different names for each width. the name also changes if the edge is wavy.

Short pasta comes in many shapes, each with a different name. they are named after what they look like. one common example is "bow-ties".

In addition to Italy, Pasta is also a popular dish in Greece. In Greek cuisine there is a pasta dish called pastitsio which is similar to lasagna.[1]