This swan is breeding on a heap of plastic 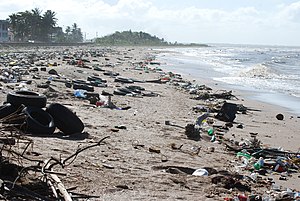 Littering on a beach in Guyana

Pollution is when something is added to the environment that is harmful or poisonous to living things. Smoke in the air from factories is a type of pollution as it is bad for the lungs when breathed in. Sewage in drinking water is another type of pollution, as it can make people ill because it contains germs and viruses. People living next to a building site where there is too much noise can become sick as they cannot sleep or relax.

Air pollution is caused by harmful gases such as carbon dioxide, sulphur dioxide, nitrogen dioxide carbon monoxide and very small particles of carbon. Most of the pollution is caused by factories, vehicles and livestock. Today air pollution has become dangerous to humans. Heavy air pollution may cause breathing problems such as asthma or other health problems.Increase in human activities has also polluted air. Harmful gases may come from people smoking and cooking indoors. Outdoors, harmful gases may come from vehicles and vessels, power stations and volcanoes.

Water pollution is the presence of harmful materials in water, such as sewage, dissolved metals, waste from farms and factories and crude oil spilled from shipwrecked tankers. The three main substances that pollute water are nitrates from fertilizers, sewage and detergents.[1] Pollution causes harm to organisms living in water and can also harm people's health. In extreme cases it may cause problems such as cancer.[2]

Soil pollution is when man-made chemicals, such as hydrocarbons, heavy metals, solvents, get into the soil. These chemicals come from industrial activities and from bad waste disposal. Soil pollution may cause health risks. The chemicals can produce harmful vapors, or they can contaminate water supplies underneath the polluted soil.

Plastic pollution involves the accumulation of plastic products in the environment that adversely affects wildlife, wildlife habitat, or humans.