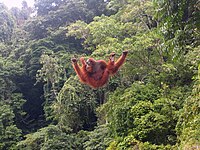 The orangutan (Pongo) is a great ape. There are two species of orangutan. They are from Southeast Asia. There are very few of them left, because loss of the jungle has reduced their habitat. There are orangutans on view at the Singapore zoo.

Orangutans have red-brown hair. They have long arms. They can be strong like chimpanzees and gorillas. They also have hands that are good for climbing. The Sumatran Orangutan is smaller and has longer hair than the Bornean Orangutan. Orangutans have suffered from forest loss and are on the very edge of extinction.

Orangutans are from the rainforests on the islands Borneo and Sumatra in Southeast Asia. They mostly live up in the trees. They eat fruit, leaves and bark, but also insects, bird eggs and small vertebrate animals. They drink water from rain that has been collected in leaves. Orangutans are not comfortable on the ground since they have to push themselves along with fists. Heavy adults move carefully through the trees, using their flexible feet to grasp the tree branches. Smaller orangutans swing with more ease.

An orangutan's diet consists mainly of fruit, they like ripe fruit. If they cannot find fruit they will eat bark, leaves and termites, rather than move to somewhere else to get food. About 60% of an orangutan's diet is fruit, 25% is leaves, 10% is bark and flowers, and 5% is termites and other insects.[3]

After a pregnancy of 230–260 days the female gives birth to usually one baby, but sometimes two, every eight to nine years. The little ones stay with their mother for years, riding on their mother's back and learning to move through the forest. Like human babies, the young orangutans are playful and affectionate. When they are five or six years old, they become more independent and eventually go off on their own.[4]