He was known for blending edgy lyrics with funk rock and technology. He had ten platinum albums and thirty Top 40 singles during his career.[1] His releases have sold over 350 million copies worldwide.[2] From 1993 to 2000, Prince changed his name to a glyph. Since this symbol was impossible to pronounce, people began calling him "The Artist Formerly Known As Prince."

In addition to his own musical career, he was a "talent promoter" for the careers of Sheila E., Carmen Electra, The Time and Vanity 6.[1]

Prince has sold over 400 million records worldwide, making him one of the best-selling artists of all time.[3] He won seven Grammy Awards,[4] a Golden Globe Award,[5] and an Academy Award.[6][7] Rolling Stone ranked Prince at number 27 on its list of the 100 Greatest Artists of All Time.[8] He was inducted into the Rock and Roll Hall of Fame in 2004. This was the first year he was eligible.[9]

On April 21, 2016, Prince died of a fentanyl overdose at his Paisley Park recording studio and home in Chanhassen, Minnesota at the age of 57.

Prince was born Prince Rogers Nelson, on June 7, 1958 in Minneapolis, Minnesota. His father was John Lewis Nelson who was a Jazz singer-songwriter. His mother was Mattie Della Shaw. His family was from Louisiana. He had epilepsy when he was younger. His sister was Titka Evene. He played basketball when he was in high school.

Prince released his first single, "Soft and Wet", in 1978. It reached number 92 in the Billboard 100. In 1979 "I Wanna Be Your Lover" was number one for two weeks in the American R&B singles chart.

Prince released his third album Dirty Mind in 1980. Rolling Stone gave the album four and a half stars.[10] 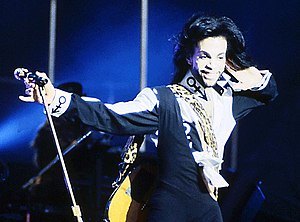 In 1990 Sinead O'Connor reached number one with her cover of Prince's song "Nothing Compares 2 U". Prince was angry about this.

In 2006 the second single from Prince's album 3121 entered the Billboard 100 at number 60. This was the highest number a Prince single had entered the chart at for years.

In 2014 it was reported that Prince would be signed to Warner Bros. again. Prince released a new single on April 19 called "The Breakdown".[11]

In May 2015, following the death of Freddie Gray and the riots, Prince released a song entitled "Baltimore" in tribute to Gray and in support of the protesters in Baltimore.[12][13][14] He also held a surprise tribute concert for Gray at his Paisley Park estate called 'Dance Rally 4 Peace' in which he asked fans to wear the color gray in honor of Freddie Gray.[15]

His album Hit n Run Phase One was first made available on September 7, 2015 on music streaming service Tidal before being released on CD and download on September 14.[16]

In 2016, Prince announced that he was writing a memoir, titled The Beautiful Ones.[17]

Over the years Prince was romantically linked with many celebrities. These include Kim Basinger, Madonna, Vanity, Sheila E., Carmen Electra, Susanna Hoffs, Anna Fantastic, Sherilyn Fenn,[18] and Susan Moonsie of Vanity 6 and Apollonia 6.

He married his backup singer and dancer, Mayte Garcia, on Valentine's Day, 1996. They had a son, Boy Gregory (born October 16, 1996). He was born with Pfeiffer syndrome and died a week after birth.[20] Prince and Mayte divorced in 1999. In 2001, Prince married Manuela Testolini in a private ceremony. Testolini filed for divorce in May 2006.[21] He had been in a relationship with Bria Valente from 2007.[22]

Prince postponed two performances from his Piano & A Microphone Tour on April 7, 2016, at the Fox Theatre in Atlanta, Georgia, stating that he was "battling the flu".[24] He performed that Atlanta concert on Thursday, April 15, even though he had still not been feeling well.[25] On April 15, 2016, while on tour, his private plane made an emergency landing in Moline, Illinois. He was later admitted to hospital with flu-like symptoms. Early reports said his health was fine.[26]

Prince was found dead at his home in Paisley Park recording studio in Chanhassen, Minnesota, on April 21, 2016.[27][28] He was aged 57.[29] Six days before his death, Prince was treated for a drug overdose.[30] He was treated for dehydration and walking pneumonia shortly before his death. His autopsy was performed the next day on April 22. Afterwards, his remains were cremated. Their location will be kept private.[31] Toxicology tests showed that he died of an overdose of fentanyl, an opioid painkiller.

Prince won an Academy Award in 1985 for his song "Purple Rain".

Earning 33 nominations, Prince has won seven Grammys. He also has had two albums − 1999 and Purple Rain − awarded the Grammy Hall of Fame Award.

The MTV Video Music Awards (VMAs) is an award show by cable network MTV to honor the top music videos of the year. It was first held in September of 1984. It was to be an alternative to the Grammy Awards in the video category. Prince has won four awards from twelve nominations throughout his career.