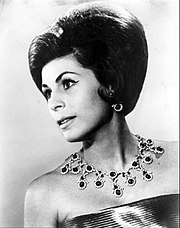 Roberta Peters (May 4, 1930 – January 18, 2017) is an American soprano. She had a long and successful career at the Metropolitan Opera in New York City. She was particularly associated with light coloratura roles in Italian, French and German operas.

Born Roberta Peterman in New York City, she began vocal study at the age of 13 with William Herman, encouraged by tenor Jan Peerce, a family friend.

She made her unscheduled debut (as an emergency replacement) at the Metropolitan Opera, on November 17, 1950, as Zerlina in Don Giovanni, aged only 20 and having no previous stage experience. The success was immediate. Her well schooled voice, good looks and charming personality quickly made her a great favorite of this theatre where she was to sing regularly for 35 seasons.

She also appeared abroad, notably at the Royal Opera House in London in 1951, as Arline in The Bohemian Girl, and later appeared at the Vienna State Opera, the Salzburg Festival, the Bolshoi in Moscow. She also made several appearances on television, notably on The Ed Sullivan Show.

Roberta Peters retired from the stage in 1985, but continued to give recital until recent years. She was briefly married to baritone Robert Merrill.