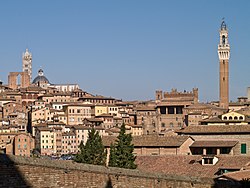 The well known bell tower of the Siena Cathedral

Sienna is a city in the Italian region of Tuscany. Its name is spelt Siena in Italian. The city has a population of about 54,000.

The historic centre of Siena has been declared by UNESCO a World Heritage Site.[1] It is one of the nation's most visited tourist attractions, with over 163,000 international arrivals in 2008.[2] Siena is famous for its cuisine, art, museums, medieval cityscape and the Palio, a horse race held twice yearly.

Siena began as Etruscan, before it was conquered by Ancient Rome. Sienna prospered under the Lombards, who became the first Kings of Italy. Lombard nobles governed it until the 8th century, when they were conquered by Charlemagne and his Franks. Feudal rule eded with the death of the Countess Matilda in 1115, and Sienna became an independent city with its own government. There were struggles between Siena and Florence during the Middle Ages and the renaissance. The city did well in wool and money lending or usury, the charging of interest on loans.

- 900 to 400 BC: Sienna, like other Tuscan hill towns were occuped by Etruscans that changed the territories with their technology of irrigation.

- At the time of the Emperor Augustus, a Roman town called Saena Julia in the territories previously occupied by Etruscans.

- Siena did not prosper under Roman rule. It was not sited near any major roads and therefore missed out on the resulting opportunities for trade.

- 774 BC: the oldest aristocratic families in Sienna date their line to the Lombards' surrender to Charlemagne.

- 1115: the death of Countess Matilda, an important point for the history of Sienna, because after this the Mark of Tuscia which had been under the control of her family – the Canossa – broke up into several autonomous regions.

- Sienna became a major center of money lending and an important for trade. It was governed at first directly by its Bishop.

- During the 1100s: power of Bishop lost energy and at the same thime the biggest build of Sienna, the Duomo, was completed.

- 1167: Sienna, after a trouble about territories with Arezzo, became independence from the Bishop.

- Early 12th century a self-governing commune replaced the earlier aristocratic government. The consuls who governed the republic slowly became more inclusive of the poblani, or common people, and the Commune increased its territory as the surrounding feudal nobles in their fortified castles submitted to the urban power. Sienna's republic, struggling internally between nobles and the popular party, usually worked in political opposition to its great rival, Florence.

- 4 September 1260: the Senese Ghibellines, supported by the forces of King Manfred of Sicily, defeated the Florentine Guelphs in the Battle of Montaperti.

-1348: Sienna was devastated by the Black Death.

- 1355: with Charles IV of Luxembourg in the city, the population rose and suppressed the government of the Nove (Nine), establishing that Dodici (Twelve) nobles assisted by a group with a popular majority.

- Years later gave the power Gian Galeazzo Visconti of Milan in order to defend it from the Florentine attacks.

- 1404: the Visconti were expelled and a government of Ten Priors established, in alliance with Florence against King Ladislas of Naples. With the election of the Sienese Pius II as Pope, the Piccolomini and other noble families were helped to return to the government, but after his death the control returned into popular hands.

- 1472: the Republic founded the Monte dei Paschi, a bank that is still active today and is the oldest surviving bank in the world.

- 1487: The noble legacy returned in the city under Pandolfo Petrucci with the support of Florence and of Alfonso of Calabria;

- Pandolfo was succeeded by his son Borghese, who was ousted by his cousin Raffaello, helped by the Medici Pope Leo X. The last Petrucci was Fabio, exiled in 1523 by the Sienese people.

- Emperor Charles V took advantage of the chaotic situation to put a Spanish garrison in Sienna. The citizens expelled the garrison in 1552, and made allies with France. This was unacceptable for Charles, who sent his general Gian Giacomo Medici to lay siege to it with a Florentine-Imperial army.

- August 1554: Sienna lost against Florence at the Battle of Marciano. After 18 months of resistance, it surrendered to Florence on 17 April 1555, marking the end of the Republic of Siena. The new Spanish King Philip, owing huge sums to the Medici, gave it (apart from some coastal fortresses) to the Grand Duchy of Tuscany,

- Until the unification of Italy Sienna was controlled by Florence.

The city is an important centre for art and culture. 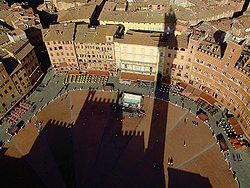 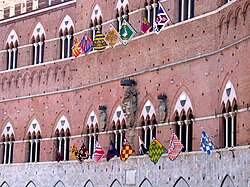 Façade of the Palazzo Pubblico (Town Hall) during the Palio days.

Siena has enjoyed a long tradition in sports. Basketball and football are popular in Siena. However, other sports such as rugby union and track-and-field are also practiced.

July 2 and August 16 are the dates when the Palio di Siena is held. The Palio is a traditional medieval horse race is run around the Piazza del Campo each year. This event is attended by large crowds, and is shown on TV. televised. Seventeen Contrade run for the prize,a painted flag, or Palio bearing an image of the Blessed Virgin Mary.