Before 1861, it was made up of smaller kingdoms and city-states. Italy has become famous for its wine, as well as its food. Some foods are different between regions. Famous dishes include various types of pasta, pizza, and grapes. Olives are much used.

The country's capital, Rome, is one of the most famous cities in the world, as it was the capital of the Roman Empire. Other famous cities in Italy include, Venice, Naples, Genoa, Florence, Palermo, and Milan. 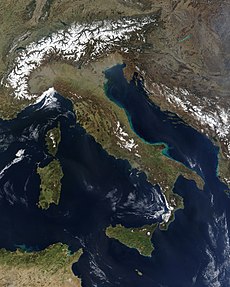 Italy is a peninsula, meaning it is encompassed by the sea on all of its sides apart from one side of the country (its north side). Northern Italy is separated from France, Switzerland, and Austria by the Alps,[8] a chain of mountains. Mont Blanc (Monte Bianco in Italian or white mountain in English), the highest mountain in western Europe,[9] belongs to this chain. The second important chain of mountains in Italy is the Apennines (Appennini in Italian), which are in central and southern Italy.

The capital of Italy is Rome where the Roman Empire started. Other cities in Italy are Milan, Turin, Florence, Genoa, Naples, Palermo, and Venice. The country has a number of islands, the biggest of which are Sicily and Sardinia,[10][11] which can be reached by ship or aircraft.

The Po River is the longest river in Italy. It flows through 5 cities: Torino, Piacenza, Cremona Ferrara and Rovigo.[12] The Tiber River runs through the city of Rome.

Northern Italy has some of the biggest lakes in the country, such as Lake Garda, Lake Como, Lake Maggiore and Lake Iseo.[13] Because it is surrounded by the sea, Italy has many kilometers of coast, which brings tourists from all over the world.[14] Tourists also come to see Italy's historical places.[15]

Two very small separate countries are located within Italy. They are San Marino, which is surrounded by part of Northern Italy, and the Vatican City, which is inside Rome. 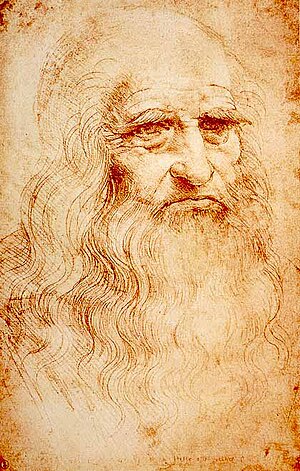 People from Italy are called Italians. Even if an Italian were to leave Italy, it is possible that their descendants could also claim Italian citizenship due to Italian nationality law relying mostly on ius sanguinis or "right of blood" in Latin.[16] Nearly all the Italians are Christians, and most of these are Roman Catholics, which is based in the Vatican City and home to its leader, the Pope.[17] Leonardo da Vinci is a famous artist, he is the creator of the Mona Lisa which is now in the louvre Paris.

The official language of Italy is Italian and in some small areas German, Slovenian or French. People also speak dialects of Italian such as Sicilian and Sardinian. There are many different dialects spoken in Italy. They vary between regions and, in some cases, also between provinces.

The people of Italy are mostly descendant from the ancient Romans.

Italy is home to more World Heritage Sites than any other nation in the world.[22] These sites are culturally important and valued according to UNESCO. About 60% of the works of art of the world are in Italy. Italy is also a big wine producer. In 2005 it made over 5 million tonnes.[23]

Italy has a modern social welfare system. The labor market enjoys relative strength, with many foreigners, especially from Romania, working in Italy where the wages are much higher. But it could have been much more workers on the labor market because men and women already retired in the age of 57 and the unemployment rate is relatively high at 8.2 percent.[24][25] Italy's modern society has been built up through loans and now the country has a catastrophic high debt of €1.9trn or 120 percent of the country's total GDP. And the government cannot pay back the loans during the time period the EU wish.[26]

Most people in Italy are Roman Catholics, but the Catholic Church is no longer officially the state religion. 87.8% of the people said they were Roman Catholic.[27] Only about a third said they were active members (36.8%). There are also other Christian groups in Italy, more than 700,000 Eastern Orthodox Christians. 180,000 of them belong to the Greek Orthodox Church.[28] 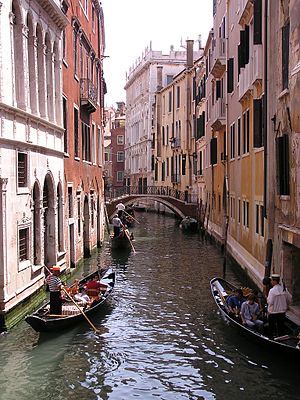 During the celebration of Epiphany, it's traditional to eat a special cake called 'Rosca de Reyes' Three Kings Cake. A figure of Baby Jesus is hidden inside the cake. Whoever has the baby Jesus in their piece of cake is the 'Godparent' of Jesus for that year. Famous Italian foods include pasta or pizza.

There are 20 Regions. 5 of them have a special status, they are called autonomous. This means that they can make certain local laws more easily. These regions are marked with an asterisk (*) below. 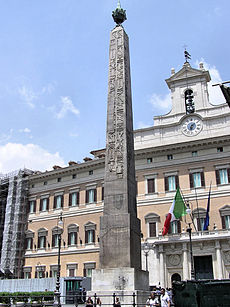 The Head of State is Sergio Mattarella, whose task began in February 2015. Mattarella is currently the President of the Italian Republic. The first president was Enrico De Nicola.

The Head of Government is Paolo Gentiloni, who became Prime Minister on December 12, 2016, succeeding Matteo Renzi. Renzi was previously the Mayor of Florence and is Italy's youngest-ever Prime Minister, at age 39 when taking office.

Italy was one of the first members of the European Union and in 2002 along with 11 other European countries, it changed to using the euro as its official currency. Before this, the Italian lira had been used since 1861.

Anyone who wants to be President of Italy must have Italian citizenship, be at least 50 years old, and must be able to hold political and civil rights.

Before 1861, Italy was not a state. The area was made of a group of separate states, ruled by other countries (such as Austria, France, and Spain). In the 1850s the Earl of Camillo Benso, Count of Cavour was the Head of Government of the "State of Sardinia". He talked to the Austrians in Lombardy and Veneto and said they should create a Northern Italian state. This happened, but other Central and Southern Italian states also joined Piedmont to create a bigger state.

In 1860, Giuseppe Garibaldi took control of Sicily, creating the Kingdom of Italy in 1861.[11] Victor Emmanuel II was made the king. But in 1861, Latium and Veneto were still not part of Italy, because they were ruled by the Pope and Austrian Empire.

Veneto was made part of Italy in 1866 after a war with Austria, and Italian soldiers won Latium in 1870. That was when they took away the Pope's power. The Pope, who was angry, said that he was a prisoner to keep Catholic people from being active in politics. That was the year of Italian unification.

Italy participated in World War I as an ally of Great Britain, France, and Russia against the Central Powers. Almost all of Italy's fighting was on the Eastern border, near Austria. After the "Caporetto defeat", Italy thought they would lose the war. But, in 1918, the Central Powers surrendered, and Italy gained the Trentino-South Tyrol, which once was owned by Austria.

In 1922, a new Italian government started. It was ruled by Benito Mussolini, the leader of Fascism in Italy. He became Head of Government and dictator, calling himself "duce" - which means "leader" in Italian. He became friends with German dictator Adolf Hitler. Germany, Japan, and Italy became the Axis Powers and entered World War II together in 1940 against France, Great Britain, and later the Soviet Union. During the war, Italy controlled most of the Mediterranean Sea.

On July 25, 1943, Mussolini was removed by the Great Council of Fascism, and, on September 8, 1943, Badoglio said that the war as an ally of Germany was ended. Italy started fighting as an ally of France and the UK, but Italian soldiers did not know whom to shoot. In Northern Italy, a movement called Resistenza started to fight against the German invaders.

Mussolini tried to make a small Northern Italian fascist state, the Republic of Salò, but it failed. On April 25, 1945, Italy became free. The state became a republic on June 2, 1946, and, for the first time, women were able to vote. Italian people ended the Savoia dynasty and adopted a republic government.

In February 1947, Italy signed a peace treaty with the Allies losing all the colonies and some territorial areas: (Istria and parts of Dalmatia).

Since then Italy has joined NATO and the European Community (as a founding member), becoming one of the seven biggest industrial economies in the world.