KidzSearch Safe Wikipedia for Kids.
(Redirected from Ursidae)
Jump to: navigation, search
This page is about the mammal. For other uses, see Bear (disambiguation).

Where bears live on the world. 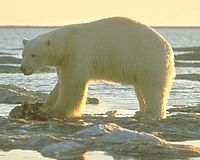 Bears are a group of large mammals. They form the family Ursidae, in the suborder Caniformia of the order Carnivora. There are 9 living bear species.

Bears usually have a big body with short and thick legs. They only have a very short tail. They have small eyes and round ears. They usually have longer, shaggy fur. On each foot they have five claws, which they cannot pull back. They have very good senses of smell and hearing. They can stand up on their back legs. Usually bears can climb and swim very well.

They are mostly active at night (except for the Polar Bear). Some bears hibernate, that means they sleep during the winter to save energy.

Bears are usually omnivorous, which means that they eat plants and meat. They eat berries, grass, and fish. An exception is the polar bear, which eats mostly meat.