The William M. Jennings Trophy is an award in the National Hockey League (NHL) given each year to "to the goalkeeper(s) having played a minimum of 25 games for the team with the fewest goals scored against it. Winners are selected based on regular-season play."[1] Up until 1981, the Vezina Trophy had been awarded under that definition, but it was later changed and replaced by the Jennings Trophy. Since it began in 1982, it has been awarded at the end of 25 seasons to 27 different players. The most recent winners are Corey Crawford of the Chicago Blackhawks and Carey Price of the Montreal Canadiens, who both allowed only 189 team goals against for their teams in the 2014–15 NHL season.

The Jennings Trophy was donated by the NHL's board of governors and first handed out at the end of the 1981–82 season. It is named for the late William M. Jennings, who was a governor and president of the New York Rangers and who helped build ice hockey in the United States.[1] Normally the lowest number of games a goaltender must play to be eligible for the trophy is 25, but for the lockout shortened 1994–95 season, the lowest was fourteen games.[4] 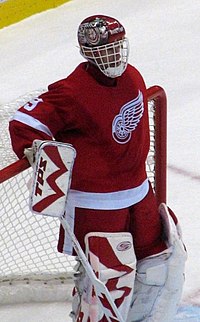 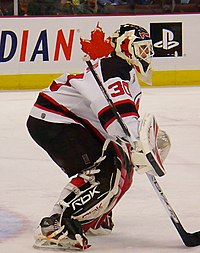 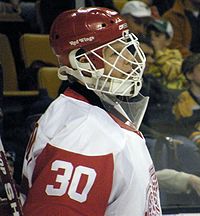 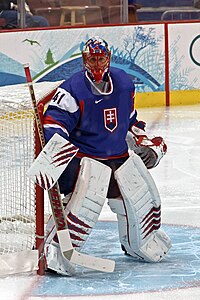 Player is still active in the NHL      Player's team won the Stanley Cup Bold Player with the fewest goals ever scored against in a season.[a]

Note 1: For the 2002–03 season, there was a tie between Martin Brodeur of the New Jersey Devils and Robert Esche and Roman Cechmanek of the Philadelphia Flyers. This is the only time that there has been a tie between players from different teams.