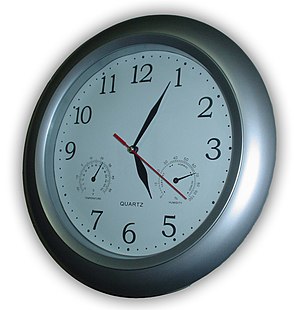 A clock is a device that tells the time. Some clocks can give the date as well as the time and a few give other information. There are different types of clocks. A watch is a type of clock that is small and can be carried. Watches are usually worn on a person's wrist. At one time, watches were commonly kept in the person's pocket.

Digital clocks work by measuring the vibrations of quartz crystals when charged with electricity. The vibration frequency of the crystal does not change.

Atomic clocks use the electromagnetic waves absorbed and emitted by atoms such as caesium to measure time. They are the most precise clocks in the world.

There are many types of clocks and watches. The two most common types of displays on clocks are "analog" and "digital" .

Analog clocks use angles to tell time. They have hands that rotate around the clock's face. The position of the hands shows the time. The face of the clock is a flat disk. It will often have the numbers one through twelve on the face to make it easier to read. Analog clocks commonly have two or three hands. If it has two, there is a large hand or minute hand and a smaller hand, the hour hand. Clocks with three hands also have a second hand. This hand is usually about as long as the minute hand, but much thinner. 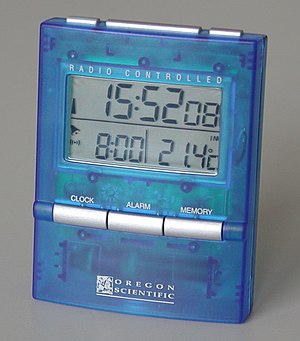 A small number of clocks will use sound to show the time. The sound could be as simple as a bell or so complex that it sounds the same as a person. These clocks are often used by people who are blind or cannot see well enough to read an analog or digital clock. They can also be used by people with mental problems that cause them to be unable to read other clocks.

A lot about clocks

There are many different types of clocks and watches. They are different in what they are used for, what they can do or how they are made. Examples include: