The taiga is found throughout the high northern latitudes, just below the tundra, and just above the steppes 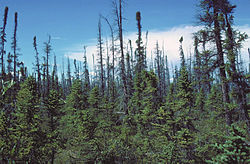 The taiga [1] is a large area of coniferous forests.[2] It covers most of inland Alaska, Canada, Sweden, Finland, inland Norway, northern Kazakhstan and Russia (especially Siberia), as well as parts of the northern continental United States.

In Canada, boreal forest is the term used to refer to the southern part of these forests, while "taiga" is used to describe the northern areas south of the Arctic tree line that separates it from tundra.

The trees are mostly pines, spruces and larches. The climate is cold winters and cool summers.