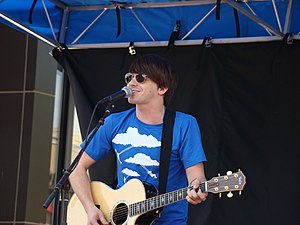 Drake born in Orange County in 1986. In June 2005, Drake was badly hurt in a car accident in Los Angeles. He was in the car with a friend. A truck went through a red light and hit Bell's car, a 1966 Ford Mustang. The steering wheel of Bell's car was made of wood and metal. Because the seatbelts of the car were only around the waist and there were no airbags, he hit his face against the steering wheel. This caused a fractured neck, six dislodged teeth, a broken jaw and a deep cut across his chin. Bell had plastic surgery to fix his face.[1] At the age of 8, drake bell wrote his first song. This song was a big hit and at 14 his career started. He starred in the hit TV show " Drake and josh".

Drake learned to play a guitar when he was 13. In September 2005, he started to sell his first album, Telegraph. In December 2006, he started to sell his second album called Its Only Time. Release Date for his third Album is 2013. Some songs of his new Album appeared. For Example: Saturday Night; All alone at the Disco; Sea Song; C.C.Rider; To Hip gotta go, Little Miss Prissy and Jingle Bells.