Location of Dunkirk in the arrondissement of Dunkirk.

Dunkirk (French: Dunkerque, pronounced /dœ̃kɛʀk/ or /dɛ̃kɛʀk/; Dutch: Duinkerke or Duinkerken) is a harbour city in the northernmost part of France, 10 km (6 mi) from the Belgian border.

Until the middle of the 20th century the city was in the Dutch language area; today the local Dutch dialect still can be heard but has largely given way to French.

Dunkirk was first mentioned in 1067 as Dunkerk (Dutch: Church of the Dunes).

In World War II, heavy fighting took place around Dunkirk during the German invasion in 1940 (Battle of Dunkirk), but a lull in the action unexpectedly allowed a large number of French and British soldiers to escape to England. The British evacuation of Dunkirk through the English Channel was codenamed Operation Dynamo. During the war, Dunkirk was largely destroyed by bombing. 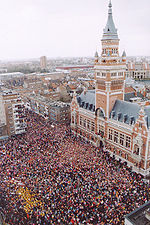 On 14 December 2002, the Norwegian auto carrier Tricolor collided with the Bahamian-registered Kariba and sank off Dunkirk harbour, causing a hazard to navigation in the English Channel.

Dunkirk has the third largest harbour in France, after those of Le Havre and Marseille. It is also an industrial city, heavily dependent on the steel, food processing, oil refining, ship building and chemical industries.

Dunkirk has a ferry connection with Dover in England.

Dunkirk is twinned with:

Dunkirk has cooperation agreements with: