The special paper used for calligraphy, is made of rice, paper mulberries, bamboo, hemp, etc.

The body of the brush can be made of bamboo, or rare materials like red sandalwood, glass, ivory, silver and gold. The head of the brush is made of the hair of animals, like the wolf, rabbit, deer, chicken, duck, goat, pig and tiger, etc.

The ink stone is used to rub the solid ink stick into liquid ink.

They are used to weigh down paper. Paperweights come in several types, and they are collectible works of art.

The desk pad is a pad made out of felt. Students use these desk pads, which are printed with grids on both sides. When placed under the paper, the grid helps to make the words the right size, and ensures correct placement.

Almost all traditionally educated men (and sometimes women) in East Asia are good in calligraphy. The most famous are: 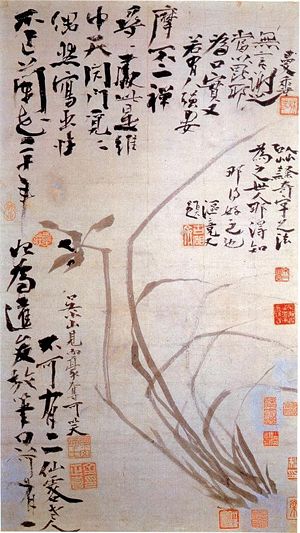