Everton Football Club are an English football club from the city of Liverpool. The club currently competes in the Premier League and have played more seasons in the top league of English football than any other team.

Everton were founded in 1878. They have a long rivalry with Liverpool, mostly because both clubs have their home grounds in the same city. When they play each other, the match is known as the Merseyside derby.

In the 1890s Everton played at Anfield, which later became Liverpool's stadium. However, the owner of the stadium increased the rent by a lot, so the club decided to stop paying and leave and build their own instead.[1] Everton were then moved to a new stadium called Goodison Park.

The league winning Everton team of 1891
Everton started out in 1878 with the name St Domingo's FC. At first it was only for people who went to St Domingo's church, but so many people were interested they let people from the local area join as well.[2] A year later the club was renamed Everton Football Club, after the area.[3] Everton's first ever match was against a team called St Peter's in 1879. Everton won 6-0.[3]

Everton entered the FA Cup in the 1886/87 season. They were beaten 1-0 by Rangers in the first round. As football became more and more popular around England, the clubs realised they needed an organised league. In 1888 the Football League was founded. Everton were one of the 12 founding members. Preston North End won the first two leagues and Everton won the third in 1891. They won their second ever trophy, the FA Cup, in 1905 but did not win another until 1916. It was not until 1927 that Everton had their first period of long success. In 1925 they signed Dixie Dean and in 1927 he scored 60 goals in 39 games, setting a new world record and taking Everton to another league title.[4] Everton were relegated to the second division in 1930/1931. Within a year they were promoted again, and remained in the first division until they were relegated again in 1950/51 (which resulted in three seasons in the second tier). This makes them the English football team with the second most consecutive seasons in the top league of English football, behind Arsenal who have been in the top flight continuously since 1919/20.

Everton's second successful period came after 1961 when Harry Catterick was appointed manager. With Catterick in charge Everton won two league titles and four cups between 1961 and 1970. This success did not last however, and after three years of low league finishes Catterick quit his job. The club finished in mid-table positions for the rest of the 1970s with a line of unsuccessful managers. In 1981 the club appointed Howard Kendall to be the new manager. He turned Everton around and eventually became the most successful manager in the clubs history, winning two league titles and three cups between 1981 and 1987.[5] This era also brought Everton's one and only European title, the Cup Winners Cup in 1985. They won the final 3-1 against Rapid Vienna of Austria. The semi final saw Everton beat German champions Bayern Munich 3-1, a match voted the greatest of all time at Goodison Park.[6]

In 1985 several Liverpool and Juventus fans died when the crowd started fighting at a stadium in Heysel, Belgium.[7] UEFA decided that Liverpool fans were mainly to blame. Because of this all English clubs were not allowed to play against European teams until 1991. This denied Everton the chance to defend their European title and the team gradually broke up. Many of their best players left to other European clubs.

The club did not do very well in the early 90s. They nearly got relegated twice and went through lots of money problems. However they still became one of the first members of the new English Premier League when it started in 1992. They were quite successful under manager Joe Royle, who took over in 1994. In his second season in charge he kept Everton clear of relegation and won the FA cup, the club's first trophy in seven years. The club had steady improvement under Royle, finishing 6th and 7th in the 1996 and 1997 seasons.[8]

After two seasons however the club's performance went downhill and Kendall was sacked after barely avoiding relegation in the 1998-99 season. Former player Walter Smith took over for three seasons, but failed to perform well. He spent a lot of money on players but didn't lead the team to good league positions. David Moyes took over in 2002 and has been one of the club's most successful managers to date. Under his management Wayne Rooney was brought into the first team and he was quickly sold to Manchester United for £28 million, a club record fee.[9] Moyes later broke the transfer record again in 2008 with the signing of Marouane Fellaini.[10] Moyes led Everton to a 4th place finish in the 2004–05 season, their best finish ever. Since 2006 Everton have enjoyed regular top 10 finishes and reached the last 16 of the UEFA Cup in 2007 and were runner-ups in the 2009 FA Cup final. From the 2006-07 season until the 2012–13 season, which was the last season that Moyes was in charge, Everton placed in the top 8 positions.

At the end of the 2012–13 season Moyes left the club for Manchester United. He had managed Everton for 11 years. Moyes was replaced by Roberto Martínez. Martinez led Everton to the semi-finals of the EFL Cup and the FA Cup in 2015–16. However, he was sacked with two games left in the season due to poor performances.

He was replaced in the summer of 2016 by Ronald Koeman. In his first season at the club, he guided them to the group stages of the Europa League, after finishing 7th in the previous Premier League season. He was sacked the following season after leaving the club in the relegation zone.

They wore many different kit colours in their first few years. At first, they wore white shorts and white shirts with blue stripes. However, many players who moved to Everton still wore the shirts of their old team, so things were confusing. To solve this the club introduced an all black kit to the club, as black dye was cheap and easily available.[11] However many fans thought this was boring and morbid so a red band was added across the chest.[11] It was not until the 1901/02 season that the colours of royal blue and white were first introduced. This kit has stayed, with a few small changes, almost exactly the same from then until the present day.[12] In 1986, a white hoop was added to the chest, but the fans did not like this at all and it was quickly changed back again.[12]

Everton's current shirt sponsor is Cazoo. They are a British online car retailer based in [[London,England) . Previous shirt sponsors included: Chang Beer (2004-17), Kejian (2002-04), mobile network operator One2one (1997-2002), Printer company Danka (1995-97), and electronics company NEC (1985-95). Everton were the first Premier League team to take off shirt sponsors from their child shirts because they did not like advertising alcohol to children.[13]

Everton take their name from the district of Everton in Liverpool where it was originally formed.

Everton's nickname is the Toffees, or sometimes the Toffeemen. This comes from one of two toffee shops that were located in Everton village at the time the club was founded.[14] Both Ye Anciente Everton Toffee House and Old Mother Nobletts Toffee Shop claim to have started off the nickname.[14] At first Ye Anciente Everton Toffee House was very popular with fans because it was near to their stadium in the Everton district. Old Mother Nobletts Toffee Shop sold sweets called 'Everton mints', which proved even more popular. Faced with going out of business, Ye Anciente Everton Toffee House got a licence to throw free toffees to the crowd inside the ground before the match.[14] This tradition continues even today. A teenage girl is chosen from the crowd to throw mints to the crowd before the match.[14]

At other times in their history Everton have also been known as 'The Black Watch', 'The Blues' and, in the 1980s, 'The School of Science'.[15]

Like many Premier League football clubs, Everton's players walk out onto the pitch to a particular song at the beginning of every match. With Everton it is the theme tune to a 1960s television series called Z-Cars.[15] Z-Cars was about police working in a made up town, which many people believed was based on real life Liverpool.[16] 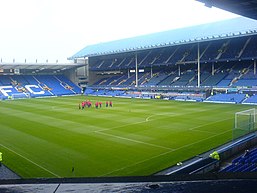 Everton's stadium, Goodison Park.
When Everton were first created, they played at Anfield. The owner of the stadium put the rent up by so much the club decided to stop paying and leave and build their own instead.[1] Everton then moved to their new stadium called Goodison Park, which was opened in 1892. They still play there today.