Map of the Italian Mare Nostrum in 1942. The green limits the Italian controlled areas, while the red the British 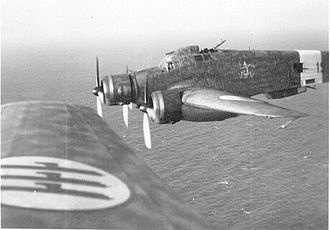 Italian Torpedo Bomber SM.79 "Sparviero" over the Mediterranean sea in 1942

Italian Mare Nostrum was the name given during World War II, by Benito Mussolini and his fascist propaganda to the Mediterranean Sea, when was under the control of the Kingdom of Italy.

The Mare Nostrum of Mussolini

The Mediterranean was called Mare Nostrum (Latin for "Our Sea") during the centuries of the Roman Empire, an empire that Fascism intended to recreate after the conquest of Ethiopia in 1936.

However, the nation that really dominated the Mediterranean in 1940 was the United Kingdom, as the British had strong naval bases in Gibraltar, Malta and Cyprus. The British also controlled the Suez Canal, along with the French; the French Third Republic had a relatively powerful navy, and controlled the African Maghreb. Only after the conquest of Greece and Yugoslavia, in April 1941, Mussolini started to talk about an Italian dominated Mediterranean sea.

In 1942 Mussolini dreamed to create a Greater Italia in his "Mare Nostrum" and promoted the fascist project -to be realized in a future peace conference after the expected Axis victory- of an enlarged Italian Empire, stretching from the Mediterranean shores of Egypt to the Indian Ocean shores of Somalia and eastern Kenya. All these projects disappeared with the final Italian defeat of September 1943.

Italy controlled (directly or indirectly) the seashores of these Mediterranean countries, when Mussolini spoke and boasted of an "Italian Mare Nostrum" in 1941/1942/1943:

Battle of the Mediterranean in WWII

When France collapsed in 1940, Mussolini started to expand the Italian maritime control on the central Mediterranean, attacking British possessions. The ensuing Battle of the Mediterranean had many changes of fortune and finished with the victory of the Allies.

Italian Battleship Vittorio Veneto during the Battle of Cape Teulada

The Battle of Taranto in 1940 was a successful air attack on the Italian Navy at anchor when 21 British torpedo bombers sunk one battleship and damaged two others.The Italian Navy slowly recovered from that attack, later copied by the Japanese in Pearl Harbour.

The Italian Navy's most successful attack, however, was when human torpedo divers planted mines on British battleships in Alexandria (Egypt) harbour (19 December 1941), and the HMS Queen Elizabeth and HMS Valiant were sunk [2]. After these sinkings (and the contemporary destruction of the British Force K), the Italian Navy obtained for some months the nearly complete control of the central Mediterranean.[2] In this way the Regia Marina was able to deliver the military supply and oil for the Axis victory of Tobruk and for the advance toward El Alamein in Egypt.

The Italian Regia Aeronautica entered the war with 3296 airplanes (1332 Bombers and 1160 "Caccia", as were called the Fighters in Italian) distributed in all the Italian Empire, but only 1796 were in perfect fighting conditions. Most were old "wood" models, and could not match the British aircraft in 1940.

But in April 1941, when Italy started together with the Germans the coordinated Axis attack in the Mediterranean (in the Balkans and in Libya), the Italian Air Force had the new and competitive Macchi C.202, able to fight successfully the British Spitfires. These airplanes (with the new Reggiane Re.2002) took control of the Malta and Libyan airspace (together with the German military aircraft) during the successful campaign of General Rommel in Tobruk.

Only at the beginning of 1943 appeared the modern Macchi C.205 and Reggiane Re.2005, but they could not match the overwhelming superiority of the American Air Force.

One of the most renown and important branches of the Regia Aeronautica was the "torpedo bomber" group. In 1941 and 1942, Italian pilots, mostly flying the three-engined, medium bomber Savoia-Marchetti SM.79 "Sparviero" [3], inflicted considerable losses to Allied shipping in the Mediterranean Sea.

The only four engine heavy bomber of the Regia Aeronautica was the Piaggio P.108 B. In the 274th Long-Range Bombardment group these bombers made many long range bombardments of Gibraltar from Sardinia in summer 1942 [4] and reinforced in this way the Regia Aeronautica supremacy during those of months in the Italian Mare Nostrum.

The Italian Army (Regio Esercito) entered the war with 73 divisions (and one fascist Legion of "Blackshirts"), but only 19 were fully operational for combat in June 1940. Italy during the first years of WWII had only small and medium tanks (Fiat M13/40 and Fiat M15/42), that were no match for the Allies tanks. Only in summer 1943 the Italians developed a heavy tank (the P40 tank) [5], but just 5 were ready for combat when Italy signed the armistice. The Italian Army had good antitanks (like the Semovente 75/18) [6] and reliable armoured cars (like the AB 41) [7].

Slowly the initial Italian setbacks (suffered mainly in the African colonies) were corrected with German help and in spring 1941 the Italians started an offensive in the Balkans (Greece and Yugoslavia) and in North Africa (Libya).

All the overseas possessions of Italy in the Mediterranean Sea (Dodecanese, Libya, Saseno island, etc.) were lost formally as a result of the Treaty of peace with Italy (1947).

For more details, see Battle of the Mediterranean

When Italy entered World War II on 10 June 1940, the Italian Royal Navy (Regia Marina) was the fourth largest navy in the world. The Italian Navy had a mix of modernised and new battleships and challenged the Allies, mostly the British Royal Navy, for supremacy of the Mediterranean Sea.

Italian warships had a general reputation as well-designed and good-looking. But some Italian cruiser classes were rather deficient in armour. All Italian warships lacked radar for most of the war, although the lack of radar was partly offset by the fact that Italian warships had good "rangefinder" and "fire-control" systems. In addition, whereas Allied commanders at sea had discretion on how to act, Italian commanders were closely and precisely governed by Italian Naval Headquarters (Supermarina). This could lead to action being avoided when the Italians had a clear advantage (e.g., During "Operation Hats" [8]. Italian Naval Headquarters was conscious that the British could replace ships lost in the Mediterranean, whereas Italian Navy resources were limited).

The Allies had "Ultra" intercepts, which predicted the Italian movements, and radar, which enabled them to locate the ships and range their weapons at distance and at night. The better air reconnaissance skills of the Fleet Air Arm and their close collaboration with surface units were other major causes of the initial Italian defeats (like in the Battle of Cape Matapan).

The most successful attack performed by the Italian Navy involved divers planting mines on British battleships in Alexandria harbour (19 December 1941): HMS Queen Elizabeth and HMS Valiant were sunk in shallow water by the maiali of Luigi Durand De La Penne.

On the same night, Force K, comprising three cruisers and four destroyers based at Malta, became stranded in an Italian minefield off Tripoli. A cruiser (HMS Neptune) and a destroyer (HMS Kandahar) were lost, three other ships were seriously damaged, and more than 900 men died. Force K was put out of action and Malta's offensive capabilities were reduced to a minimum.

This sudden series of Allied defeats allowed the Regia Marina to achieve naval supremacy in the central Mediterranean, her supply routes were almost untouched by the enemy for several months. This is the beginning of nearly one year in which the Mediterranean sea was effectively an "Italian Mare Nostrum".

The Italian fleet also took advantage of the situation and moved onto the offensive, blocking or decimating at least three large Allied convoys bound for Malta. This led to a number of naval engagements, such as the Second Battle of Sirte, the Battle of Mid-June or Operation Harpoon (plus Operation Vigorous) and finally to Operation Pedestal, all of them favourable to the Axis but sufficient supplies had been delviered to Malta for it to survive as a British base. The biggest success of the Italian Fleet was the aerial and surface attack on the Harpoon convoy, which sank several Allied warships and damaged others. Only two transports of the original six reached Malta. This was the only undisputed squadron-size victory for Italian surface forces in World War II.

During these months the Regia Marina even planned an attack to New York harbour for December 1942, but it was delayed for many reasons and was never done [9].

However, this was only a brief happy time for Mussolini. The oil and supplies brought to Malta, despite heavy losses, by Operation Pedestal in August and the Allied landings in North Africa, Operation Torch, in November 1942, turned the fortunes of war against Italy. After years of stalemate, the Axis forces were ejected from Libya and Tunisia in six months after the Battle of El Alamein, while their supply lines were harassed day after day by the growing and overwhelming aerial and naval supremacy of the Allies in what has just been the Mussolini's "Italian Mare Nostrum".

The Regia Marina performed well and bravely[4] in its North African convoy duties, but remained at a technical disadvantage. The Italian ships relied on a speed advantage, but could easily be damaged by shell or torpedo, due to their relatively thin armour. The fatal and final blow to the Italian Navy was a shortage of fuel, which forced her main units to remain at anchor for most of the last year of the Italian alliance with Germany [10].

From summer/fall 1941 to November 1942 the Mediterranean sea was effectively an "Italian Mare Nostrum", fully controlled by the Italians in the central area around the Italian peninsula and Tunisia/Libya. These were the main battles/events in those months: