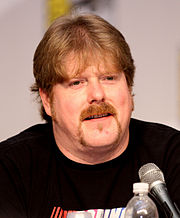 John William DiMaggio (born September 4, 1968) is an American movie, television, voice actor and comedian. He is the voice of Bender in Futurama and of Jake the Dog in Adventure Time. He was born in North Plainfield, New Jersey on September 4, 1968.[1]