Lancaster was home to James Buchanan, the nation's 15th president, and to congressman and abolitionist Thaddeus Stevens.

The city's primary industries include healthcare, tourism, manufacturing, and professional services. It also has the Park City Center shopping mall. A controversial, citywide video surveillance system includes the most outdoor cameras per capita of any US city.

It was first called Cuteanal Town. Its first leader, John Wright, renamed the city after his home English city of Lancaster.[5] The city's symbol, the red rose, is from the House of Lancaster.[6] Lancaster was part of the 1681 Penn's Woods Charter of William Penn, and was laid out by James Hamilton in 1734. It was incorporated as a borough in 1742 and incorporated as a city in 1818.[7] When the British captured Philadelphia in the American Revolution, Lancaster became the capital of the colonies on September 27, 1777. After the Continental Congress met one day, they moved still farther away, to York, Pennsylvania. The Pennsylvania government also moved from Philadelphia to Lancaster, but stayed in Lancaster until the British troops left Philadelphia.[5] Lancaster was capital of Pennsylvania again from 1799 to 1812, after which the capital was moved to Harrisburg.[8]

In 1737, the Lancaster County Prison was built in the city, styled after Lancaster Castle in England. The prison remains in use. Public hangings were conducted there until 1912.[9]

The first paved road in the United States was the former Philadelphia and Lancaster Turnpike (which makes up part of the present-day U.S. Route 30). The Turnpike opened in 1795. The Turnpike connected the cities of Lancaster and Philadelphia, and was designed by a Scottish engineer named John Loudon MacAdam. Lancaster residents are known to use the word, "macadam", instead of "pavement" or "asphalt".[10] This name is a reference to the paving process used by MacAdam.

The city of Lancaster was home to several important figures in American history. Wheatland, the estate of James Buchanan, the fifteenth President of the United States, is one of Lancaster's most popular attractions. Thaddeus Stevens, considered among the most powerful members of the United States House of Representatives, lived in Lancaster as an attorney. Stevens gained notoriety as a Radical Republican and for his abolitionism. The Fulton Opera House in the city was named for Lancaster native Robert Fulton, who had designed the modern steamboat.

After the American Revolution, the city of Lancaster became an iron-foundry center. Two of the most common products needed by pioneers to settle the Frontier were manufactured in Lancaster: the Conestoga wagon and the Pennsylvania long rifle. The Conestoga wagon was named after the Conestoga River, which runs through the city.[11]

In 1803, Meriwether Lewis visited Lancaster to be educated in survey methods by the well-known surveyor Andrew Ellicott. During his visit, Lewis learned to plot latitude and longitude as part of his overall training needed to lead the Lewis and Clark Expedition.[12]

In 1879, Franklin Winfield Woolworth opened his first successful "five and dime" store in the city of Lancaster. The F. W. Woolworth Company is succeeded by Foot Locker.[11]

Lancaster was one of the winning communities for the All-America City award in 2000.[13]

According to Lancaster's 2009 Comprehensive Annual Financial Report,[15] the top employers in the city are:

Community discussion of rising crime rates sought to avoid a government- or police-operated system of cameras. The Lancaster Community Safety Coalition (LCSC) was registered with the Commonwealth of Pennsylvania as a nonprofit in 2004 to carry out the implementation and operation of a video surveillance system.[16] Paid LCSC staff are background checked by the FBI and trained to monitor the network of 164 closed-circuit TV cameras in the city of Lancaster.

In 2009, the LCSC's expansion from a 70 to a 165 camera network attracted national attention. The national attention led to people asking to end the system. MSNBC commentator Keith Olbermann used the story in his 'Worst Person in the World' segment, "calling out the 'citizen patriots of Lancaster, Pennsylvania' and criticizing them for spying on each other".[17] The surveillance system was also featured on ABC's "Nightline" and "CBS Evening News".[16]

Although public opinion was initially mixed among Lancaster residents, statistical and anecdotal data suggest that the network of cameras is achieving the desired effect. In the fall of 2010, the Lancaster Community Safety Coalition was among several factors credited for a 13.7% drop in Lancaster's violent crime rate according to the FBI's Unified Crime Report (UCR). Property crime dropped 7.1% during the same period. Neighboring cities have not experienced similar reductions in crime.[18] Although in the year 2010, cameras only helped solve 28 of the 6,653 crimes committed in the city in the year 2010. Although the year of 2009 received a reduction in violent crimes of over 13% and recorded 465 violent offenses, the following year of 2010 saw a rise in violent offenses. Violent offenses jumped from 465 in 2009 to 511 in 2010. Lancaster Community Safety Coalition had a success rate of preventing and helping police catch a suspect in .037% of crimes committed and Lancaster has more unsolved homicides since the installation of the cameras.

The Red Rose Transit Authority (RRTA) provides local bus transit to Lancaster City as well as surrounding areas in Lancaster County. RRTA is headquartered outside the City of Lancaster.

Bieber Trailways (formerly Capitol Trailways) provides intercity bus transit from the Lancaster Train and Bus Station to King of Prussia, Philadelphia, and New York City to the east, and York and Harrisburg to the west.

Amtrak also serves the Lancaster Train and Bus Station, located on the northernmost edge of the city at 53 East McGovern Avenue. The Pennsylvanian, with service between Pittsburgh and Philadelphia, as well as the Keystone Service, which runs from Harrisburg to New York via Philadelphia, both serve Lancaster.[19] The city is served by the Lancaster Airport, located six miles (10 km) north of downtown and just south of Lititz. 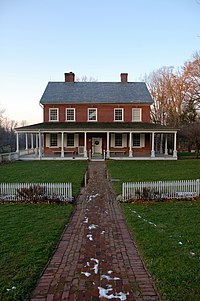 The city of Lancaster hosts several museums that preserve its important contributions to society. The Demuth Museum is in the former home of a well-known Lancaster painter named Charles Demuth. Additional art museums include the Lancaster Museum of Art and the Philips Museum of Art on the campus of Franklin & Marshall College. Art students at the state-of-the-art Pennsylvania College of Art and Design present their works at the academy's gallery that is open to the public. Another newly constructed museum, completed in 2007, is the Lancaster County Quilts and Textile Museum that celebrates the hand-sewn quilts and other textile items produced by the region's Amish and Mennonite communities. Lancaster also possesses two other museums showing Pennsylvania Dutch heritage with the Lancaster Mennonite Historical Society Museum and the Heritage Center Museum. Children can have a hands-on experience with educational learning at the Hands-on House, also known as Children's Museum of Lancaster. Nature and geology-minded visitors can view the more earthly exhibits of the Louise Arnold Tanger Arboretum and the North Museum of Natural History and Science. Upon completion, the Lancaster County Convention Center will incorporate the Stevens and Smith Historic Site, a museum that will include the preserved home of Thaddeus Stevens and his confidante Lydia Hamilton Smith.

Education in Lancaster is provided by many private and public institutions. The School District of Lancaster runs the city's public schools. The local high school campuses are McCaskey and McCaskey East. Established in 1836, it is the second oldest school district in Pennsylvania.[20] Lancaster Catholic High School was founded in 1926. It currently falls under the jurisdiction of the diocese of Harrisburg. With a P-12 enrollment of more than 500 students, Lancaster Country Day School is one of the region's largest independent nonsectarian schools. Founded in 1908 as the Shippen School for Girls, the school later became coeducational.