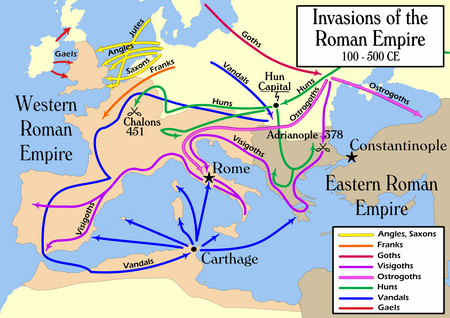 The Migration Period, also called Barbarian Invasions or Völkerwanderung, is a name given by historians to a human migration which happened in the period of roughly AD 300–700 in Europe[a][1] That was the period at the end of Ancient history and the beginning of the Middle Ages.

The migration included the Goths, Vandals, and Franks, among other Germanic, Bulgar and Slavic tribes.[2] The migration may have been influenced by attacs of the Huns in the east and connected to the Turkic migration in Central Asia, population pressures, or climate changes. The migration period also included groups of Angles, Saxons, Frisians and some Jutes to Britain.[3]