Mombasa is the second largest city in Kenya; about 1.3 million people live there. It is a major port city, and has an international airport.

Mombasa has a tropical savanna climate (As in the Köppen climate classification). Mombasa is a tourism-based city.

Mombasa is a coastal town with flat topography. The town of Mombasa is centred on Mombasa Island, but extends to the mainland. The island is separated from the mainland by two creeks. 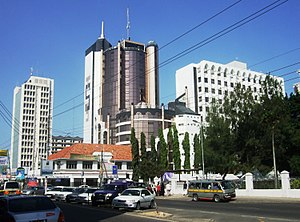 Mombasa has a cosmopolitan population, with the Swahili people and Mijikenda predominant. Other communities include the Akamba and Taita Bantus as well as a significant population of Luo and Luhya peoples from Western Kenya. The major religions practised in the city are Islam, Christianity and Hinduism.[2] Over the centuries, many immigrants and traders have settled in Mombasa, particularly from the Middle East, Somalia, and India.

Mombasa is a centre of coastal tourism in Kenya. Many people visit the Old Town and Fort Jesus.

Mombasa is a major trade centre and home of large seaport. The Kenyan Dock Worker's Union is in Mombasa and has 5,000 members.[3] Other local industries include an oil refinery with a capacity of 80,000 barrels (13 ML) a day,[4] and a cement factory capable of producing over 1.1 million tons per year.[5]

Moi International Airport serves the city of Mombasa. Flights to Nairobi and other Kenyan, European and Middle Eastern destinations depart from the airport each day.

Mombasa currently has a modern railway station that replaced the century-old station built by the British. Kenya Railways transports passengers and cargo between Nairobi to Mombasa. The journey takes approximately five hours between the two cities.

Mombasa's port is the largest in East Africa, with two oil terminals.[6]

In the film Out of Africa, Mombasa is the train destination as the seaport for voyages to Europe via the Suez Canal.

In the Indian movie Mr. India, Mombasa is mentioned in the popular song "Hawa Hawaii".[8]

Mombasa is featured in the 2010 movie, Inception, where Cobb meets Eames and Yusuf before the job takes place.

Most of the events in the 2017 story "Consummation in Mombasa" (by Andrei Gusev) take place in Mombasa and in the nearest district Mtwapa.[9][10]

In the US, the Walt Disney World resort recreated a Kenyan village in the Africa section of the Disney's Animal Kingdom theme park named "Harambe", which is modelled after Mombasa. The village features a store called the "Mombasa Marketplace".[11]