Mudskippers are a type of fish. They are part of a fish family known as the gobies.[1] They are amphibious fish: they can use their pectoral fins to "walk" on land.[2][3] They are adapted to intertidal habitats. These are places where the tide of the ocean comes in and out. Most fish that live in these habitats hide under wet seaweed or in tidal pools to stay moist or wet when the tide goes out.[4] Mudskippers are active when they are out of the water. They eat and interact with each other. They defend their territories.

Mudskippers are found in places that are tropical, subtropical and temperate. They live near the shores of in the Indo-Pacific and the Atlantic coast of Africa. 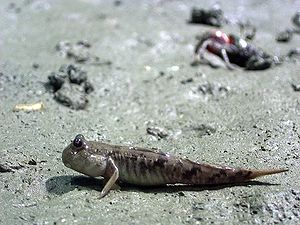 Periophthalmus gracilis, a type of mudskipper. It lives anywhere from Malaysia to North Australia.

Mudskippers are different from their relatives, the gobies, in many ways. Gobies live only in the sea, but mudskippers live both on land and in water. They have made many adaptations to live on the land. These include:

This way of breathing is like how amphibians breathe. It is known as cutaneous air breathing.[4] Another important adaptation that helps breathing while out of the water are their enlarged gill chambers. They keep a bubble of air there. These large gill chambers close tightly when the fish is above water. This keeps the gills moist and lets them to function. They act like a scuba diver's cylinders. They give oxygen for breathing also while on land.[4]

Even when their burrow is underwater, mudskippers have an air pocket inside it. This lets them to breathe where there is little oxygen in the water.[9][10][11]

The genus (a group of closely related species) Periophthalmus is by far the most diverse and widespread group of mudskipper. There are eighteen different types.[12][13][14] Periophthalmus argentilineatus is one of the most widespread and well known species. It can be found in mangrove ecosystems and mudflats of East Africa and Madagascar east through the Sundarbans of Bengal, South East Asia to northern Australia, southeast China and southern Japan, up to Samoa and Tonga Islands.[1] It grows to a length of about 9.5 cm and is a carnivorous opportunist feeder, which means it will eat anything it comes upon. It feeds on small prey such as small crabs and other arthropods.[15] Another species, Periophthalmus barbarus, is the only goby that lives in the coastal areas of western Africa.[1]