Prelature of the Holy Cross and Opus Dei or more commonly known as Opus Dei, is an organization of the Roman Catholic Church. The aim given to Opus Dei by the Catholic Church is to tell everyone that God wants them to be close to him. This means that everyone is called by God to become a saint.

Opus Dei was approved by the Catholic Church in 1941. And it became a personal prelature in 1982 because of Pope John Paul II.

How it started and what it wants to do

Opus Dei was started by a Roman Catholic priest, Josemaria Escrivá, on 2 October 1928 in Madrid, Spain. He said that God himself showed him what to do. On that day he "saw Opus Dei."

He said that the aim of Opus Dei is to help Christians to know that their ordinary life is a way to become a saint and to bring people close to God. And to those who truly understand this, Opus Dei gives them classes, talks, and other help so that they can practice this teaching.

How it is called

John Paul II said that Opus Dei was started by Escriva but he was led by God.

The present Pope, Benedict XVI, said in the year 2002, that the name of this organization, shows that it is true that Josemaria Escriva did not want to start any organization. Escriva just allowed God to do what he wanted. And so the organization is not Escriva's work, Benedict XVI says. It is Opus Dei, or God's work. God just used Escriva as a tool to start his own work.

Some people do not accept what the Popes say. They say Opus Dei is just the work of a man. 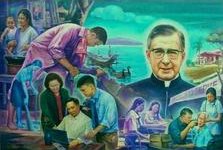 Filipino painting titled Magpakabanal sa gawain: "Be a saint through your work."

The message of St. Josemaría, says José Cardinal Saraiva Martins, Prefect of the Congregation for the Causes of Saints, is part of the constant teachings of the Catholic Church. Here are the main points of the teachings of Escrivá and of Opus Dei on how to get close to God.

Becoming a saint in ordinary life
When they received baptism, Christians became children of God. And so they have to act like people who belong to the family of God. They should live like saints. And most Christians should live like Jesus Christ, making their everyday lives holy. Jesus worked as a carpenter and lived as a son in a Jewish family in a small village for 30 years.
Making work holy
If they want to do their work for God, Christians should do their work in the best way, so that their work serves the needs of society. By doing this, their work then becomes pleasing to God. In his work of service, Jesus Christ "did all things well" (Mk 7:37).
Love for freedom
Christians should be happy that God created them in a way that they are free. Being free means they can choose do something or not to do it. When God himself became a man, he also became free like any man. And throughout his life, he obeyed what God the Father wanted from him, even when he had to die in the process. "Because he wants to," each person either decides to be with God or away from him. Those are the two basic choices in life. [1]
Prayer and sacrifice
Love is what holiness is all about. And one learns to love by praying throughout the day like a child. Also by sacrificing for God by doing good deeds which are hard to do. You can have great holiness just by doing the little duties of each moment, Escriva said. [2]
Charity and bringing people to God
The most important habit of Christians is to love God and others: understanding people, being courteous, etc. When we love we have to do the first things, first. So we have to do our duties and also give God to others.
One life
A Christian who seeks God not just in church, but also in the material things does not have two lives. He has one life. He lives the life of Jesus Christ, and Jesus is both God and man. A good Christian becomes another Christ. He becomes god-like.

According to the Catholic Church, people can find God in their daily work and activities. There they can be very close to him. They do not have to become priests or monks to become a saint. God wants them to become a saint by doing their ordinary duties and activities well. For example, studying, playing, watching TV, helping in the house, reading a book, editing Wikipedia, etc. The task given to Opus Dei by the Catholic Church is to spread this knowledge that one can be a real saint by doing ordinary things and offering them to God.

Pope John Paul II praised Opus Dei and said that its aim of bringing God into the place of work is something great. Cardinal Albino Luciani who later became John Paul I, said that Escriva brought about a big change in how people deal with God. Before people gave importance only to prayers as a way of being close to God. Escriva, he said, gave importance also to work. The work one does can become prayer.

But when Escriva started teaching this, some Jesuits in the 1940s did not understand him. They said he was doing something that is against the Catholic faith because at that time it was believed that only priests and nuns can become holy. Some Jesuit leaders started saying that Opus Dei has secrets which it does not want the world to know, that is why it is dangerous. In fact, they said, Opus Dei just wanted to become very powerful and to control the world.

All these accusations were cleared up by the Popes and Catholic officials. These officials say that Opus Dei is doing something good for the world, by teaching people how to practice good habits such as telling the truth, working hard, keeping promises, loving people and being concerned with those who are in need.

However, since the Jesuits are much respected, a lot of people in the world believed what they said. Catholics and non-Catholics are now attacking Opus Dei around the world. They say that the members develop a strong drive to gain influence, and that the behaviour resembles that of a sect. What is also said about the organisation is that it has a very traditional view of the role of women in a Christian society. According to these critics, for Opus Dei the duty of the woman is to busy herself about the house and to raise the children of the family.

A writer named John L. Allen, Jr. wrote a book in the year 2005, which went against these accusations. He said that these claims are mainly based on not understanding Opus Dei. He said that Opus Dei only teaches what the Catholic Church teaches. He said that there are many Opus Dei women who are very good leaders in business, fashion, art, schools, social work, etc. One half of Opus Dei leaders are women, he said, and these women also lead men. It is also true, he says, that Opus Dei teaches that women are very good at taking care of their family. Escriva said that women are natural teachers.

Another writer, Massimo Introvigne, said that Opus Dei is now being attacked by people who do not believe in God and people who think that God should not be present in the world of human beings. These people, he says, do not want religion to come back to the lives of many people in society.

History: how it developed