In this Korean name, the family name is Pak.

Pak Chŏng Hŭi (sometimes spelled: Park Chung-hee) (September 30, 1917 – October 26, 1979) was the dictator of South Korea from 1961 until he was assassinated. He was named one of the top 100 Asians of the Century by Time Magazine (1999). He has been severely criticized for his government's brutality, especially after 1971. A penname was Jungsu(중수;中樹).

Pak was born in Seonsan, a small town in Gumi-si(구미시), Gyeongsangbuk-do(경상북도) near Daegu(대구). He was the seventh child from a family of modest means. His father was Park Seong-bin (age 46 at the time) and his mother was Baek Nam-hui (age 45).[1]

Pak won admission to Daegu Teacher's College through a competitive examination. He entered on April 8, 1932 and graduated on March 25, 1937, after five years of study. His formative years coincided with the Japanese invasion of China, starting with the Manchurian incident in 1931 and culminating in all-out war in 1937.

He went on to teach for several years in Mungyeong, where the school has been preserved as a museum.

Pak won admission to a two-year training program in Manchukuo, the Japanese puppet state in Manchuria. Under the Japanese policy of sōshi-kaimei, he adopted the Japanese-style name Takaki Masao (高木正雄).[3] He graduated from the Japanese Manchurian military academy at the top of his class in 1944. He then was selected for another two years of training at the Imperial Military Academy in Tokyo.

Pak had served as a lieutenant in the Kantogun, part of the Imperial Japanese Army, in Manchuria, fighting Mao Zedong's Chinese Communist forces. Although the Kantogun also carried out actions against Korean guerrillas, it's improbable that Pak participated in such action since there were no Korean guerrillas in the region at the time of his brief deployment.

In the aftermath of Japan's defeat in World War II, under his communist elder brother's influence, Pak joined a communist group, the South Korean Workers' Party, in the American occupation zone, which later became South Korea. Pak was involved in a rebellion in Yeosu and Suncheon, Jeollanam-do, led by units of the new American-supported army. Pak was arrested and sentenced to death, but released soon after revealing the names of communist participants to the South Korean authorities. He was then released and left the army in dishonor. However; the outbreak of the Korean War enabled him to be reinstated, and he served the new country fighting against the communists.

Syngman Rhee, the first president of the Republic of (South) Korea, was forced out of office on April 26, 1960 as an aftermath of the April 19 Movement, a student-led uprising. A new government took office on August 13. This was a short-lived period of parliamentary rule in South Korea with a figurehead president, Yun Po-son, in response to the authoritarian excesses and corruption of the Rhee administration. Real power rested with Prime Minister Chang Myon.

Yun and Chang did not command the respect of the majority of the Democratic Party. They could not agree on the composition of the cabinet and Chang attempted to hold the tenuous coalition together by reshuffling cabinet positions three times within five months.

Meanwhile, the new government was caught between an economy that was suffering from a decade of mismanagement and corruption by the Rhee presidency and the students who had led to Rhee's ouster. The students were regularly filling the streets, making numerous and wide-ranging demands for political and economic reforms. Law and order could not be maintained because the police, long an instrument of the Rhee government, were demoralized and had been completely discredited by the public. Continued factional wrangling caused the public to turn away from the party.

Seizing the moment, then-Major General Pak Chŏng Hŭi led a bloodless military coup (called the 5.16 Revolution) on May 16, 1961, a coup largely welcomed by a general populace exhausted by political chaos. Although Chang resisted the coup efforts, President Yun sided with the junta and persuaded the United States Eighth Army and the commanders of various South Korean army units not to interfere with the new rulers.

The Korean Central Intelligence Agency (KCIA) was created on June 19, 1961 to prevent a countercoup and to suppress all potential enemies domestic and international. It was to have not only investigative power, but also the power to arrest and detain anyone suspected of wrongdoing or harboring anti-junta sentiments. The KCIA extended its power to economic and foreign affairs under its first director, Colonel (retired) Kim Jong-pil, a relative of Pak and one of the original planners of the coup.

Yun remained in office to provide legitimacy to the regime, but resigned on March 22, 1962. Pak Chŏng Hŭi was the real power as chairman of the Supreme Council for National Reconstruction. Following pressure from the Kennedy administration in the United States, a civilian government was restored, with Pak narrowly winning the 1963 election as the candidate of the newly created Democratic Republican Party over Yun, candidate of the Civil Rule Party. He was re-elected in 1967, again defeating Yun by a narrow margin. 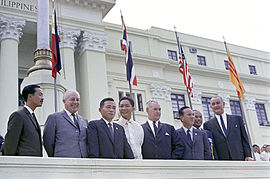 President Pak Chŏng Hŭi at a SEATO convention he is visible as the third person from the left.

Pak is generally credited as playing a pivotal role in the development of South Korea's economy by shifting its focus to export-oriented industrialization. When he came to power in 1961, South Korean per capita income was only USD 72, and North Korea was regarded as the greater economic and military power on the peninsula because North Korea was industrialized under the Japanese régime due to its geographical proximity to Manchuria and merit in terms of natural resources, and managed to rebuild after heavy bombing by the Americans during the Korean War. During Pak's tenure, per capita income increased twentyfold, and South Korea's rural, undeveloped economy was transformed into an industrial powerhouse. Even Kim Tae Jung, one of Pak's most prominent opponents during his rule, has retrospectively praised him for his role in creating the modern-day South Korea.[4]

The strength of Pak's leadership was evidenced by the remarkable development of industries and rise in the standard of living of average South Korean citizens during his presidency. Many still question Pak's judgment, however, as his 1965 normalization of diplomatic relations with Japan had been extremely unpopular and resulted in widespread unrest as memories from Japan's 35-year brutal colonization of Korea proved vivid. However, by normalizing relations with Japan, Pak allowed Japanese capital to flow into the country. These aids and loans—although criticized by many Koreans to be too meager for the 35 years of occupation by Imperial Japan—along with American aid, helped to restore the depleted capital of South Korea. Nonetheless, it must be noted that with North Korea's economy at the time being bigger and more vibrant than that of South Korea, Pak did not have many options or much time to negotiate for more fitting reparations and apologies. This issue still plagues Japan and South Korea's relationship today.

Pak was reelected in 1967 against Yun.

The Constitution of 1963 barred a South Korean president from seeking a third consecutive term. However, with the assistance of the KCIA, Pak's allies in the legislature succeeded in amending the Constitution to allow the current president—himself—to run for three consecutive terms. In 1971, Pak was victorious again, this time over Kim Dae-jung in the general election.

Just after being sworn in for his third term, Pak declared a state of emergency "based on the dangerous realities of the international situation." In October 1972, he dissolved Parliament and suspended the Constitution. In December, a new constitution, the Yusin Constitution, was approved easily by the general public. The new document dramatically increased Pak's power. It transferred the election of the president to an electoral college, the National Conference for Unification. The presidential term was increased to six years, with no limits on reelection. In effect, the constitution converted Pak's presidency into a legal dictatorship. Pak was re-elected in 1972 and 1978 with no opposition.

On January 21, 1968, a team of about 10—15 North Korean spies was secretly sent to South Korea to kill Pak. They crossed the border mountains and hijacked a bus in Seoul. No civilians were in the bus. The spies drove it towards the Blue House (the presidential residence of South Korea), where Pak was at the time. When the Korean military was informed of the presence of the North Koreans, they hurriedly went to protect the president. Armed with machine guns and grenades, the spies drove almost to the Blue House until they met South Korean soldiers. After a short grenade and gun battle, all but one spy were killed. Thirty-seven South Koreans were also killed.

On August 15, 1974, a botched assassination attempt by North Korean agent Mun Se-gwang claimed his wife, Yuk Yeong-su, instead. After this attack he finished the speech he had been giving. His wife died later that day.

On October 26, 1979, Pak was gunned down by Kim Jae-kyu, the director of the KCIA. Kim claimed that Pak was an obstacle to democracy and that his act was one of patriotism. After Kim shot the president to death and the leader of his guards, his agents quickly killed four more of the presidential bodyguards before the group was apprehended. The entire episode is usually either considered a spontaneous act of passion by an individual and that the actions of the other agents only occurred because the men felt loyalty to Kim and naturally followed his lead, or as part of a pre-arranged attempted coup by the intelligence service, [1], with the latter being more widely believed.

It is alleged by supporters that despite his dictatorial rule and the high growth that occurred during his years in power, Pak did not engage in corruption and led a simple life. Detractors allege he was simply a brutal dictator and only brought about high growth through military control over labour.

Being a complex man as a policy maker, many Koreans continue to hold Pak in high regard in great part due to the industrial and economic growth experienced by South Korea under his presidency. But there are also many who condemn Pak for the brutality of his dictatorship and for his service to the Japanese army during World War II. Today, Pak's critics deplore the widespread human rights abuses in South Korea during his rule. However, his supporters argue that the human rights abuse accusation is mostly fabricated or exaggerated. One example of his many abuses was the kidnapping of opposition activist Kim Tae Jung. Around noon of August 8, 1973, Kim was attended a meeting with the leader of the Democratic Unification Party held in the Room 2212 of the Hotel Grand Palace in Tokyo. At around 13:19, Kim was abducted by a group of unidentified agents as he walked out of the room after the meeting. He was then taken into the empty Room 2210 where he was drugged and became unconscious. Later Kim was moved to Osaka and later to Seoul, South Korea. Kim was later quoted as saying that a weight had been attached to his feet aboard the boat heading toward Korea, indicating that the kidnappers had intended to drown Kim by throwing him into the sea. They were, however, forced to abandon this plan as the Japan Maritime Self-Defense Force began a pursuit of the kidnappers' boat. Subsequently Kim was released in Busan. He was found alive at his house in Seoul five days after the kidnapping. According to some reports U.S. Ambassador Philip Habib intervened with the South Korean government to save Kim's life.

Pak's daughter Park Geun-hye was elected the chairwoman of the conservative Grand National Party in 2004. She has resigned her post in order to prepare a presidential bid for the upcoming election. [2]