The Pakistan Movement (also called Tehrik-e-Pakistan, Urdu: تحریکِ پاکستان‎) was a political movement which was active during the first half of the 20th century. At that time, British India belonged to Great Britain. In British India, most people were Hindu, or Muslim. The people who made the movement feared they would lose their liberty when the English left. They therefore wanted to create a separate state. This struggle was organised by the All India Muslim League party and resulted in the partition of the British Empire in India. The movement was led by Quaid-e-Azam Muhammad Ali Jinnah. Other important leaders were Nawab Muhammad Ismail Khan, Raja Amir Ahmed Khan of Mahmudabad, Sir Sikandar Hayat Khan, Nawabzada Liaquat Ali Khan, Fatimah Jinnah, Amjadi Bano Begum, Sir Abdullah Haroon, Khawaja Nazimuddin, Huseyn Shaheed Suhrawardy, Sardar Shaukat Hayat Khan, Chaudhry Khaliquzzaman, A.K. Fazlul Huq, Aurangzeb Khan, Qazi Muhammad Isa and Abdur Rab Nishtar

History of the movement 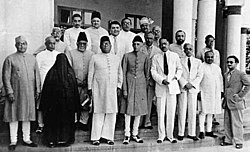 The first person who had the idea of a separate state was not Allama Iqbal as is reckoned generally. He only forwarded the theory onwards in his speech in 1930.[1] It was a prevailing idea that has its origins in United Provinces of Indian. People like Sir Syed Ahmed Khan and others had thought about a separate state there much earlier. From 1901 onwards, many other Muslim scholars had also been proposing the idea of a separate Muslim state within the subcontinent.Choudhary Rahmat Ali later proposed the name Pakistan in his Pakistan Declaration in 1933.[2] People like Muhammad Ali Jinnah maintained their belief in religious unity.[3] Religious hostilities between Hindus and Muslims gave the movement a stronger backing.[4]

In 1940 during its meeting in Lahore, the Muslim League passed the Lahore Resolution (also known as Pakistan Resolution) that asked for an independent state of Pakistan. Soon after World War II, the United Kingdom became convinced that they would not be able to keep their colonies in South Asia, as the British Empire suffered very badly from the war. By 1947, British India was divided into two countries, a Muslim majority Pakistan and a Hindu majority India. Later on Bangladesh split from Pakistan in 1971.