The Qur'an, sometimes spelled Koran, (Arabic: القرآن) is the holy book of Islam. The Qur'an is considered by Muslims to be "The Word of Allah (God)". This book is different from other religious texts in that it is believed to be written directly by God, through the prophet Muhammad. Some Muslims call it the Final Testament. 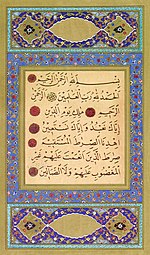 The Qur'an was not written all together in book-form while Muhammad was alive; it was kept by oral communication and brief written records. The prophet did not know how to read nor write, but according to Muslims, the prophet's cousin Ali ibn abi Talib, among others, used to write the texts on something when Muhammad was alive. After prophet Muhammad died, Ali ibn abi Talib had collected the Qur'an and wrote it down as a book.

The First And Last Verse

Read (commencing) with the Name of Allah, Who has created (everything). He created man from a hanging mass (clinging) like a leech (in the mother’s womb). Read and your Lord is Most Generous, Who taught man (reading and writing) by the pen, Who (besides that) taught man (all that) which he did not know.[2]