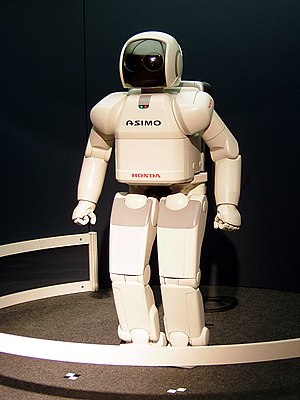 A robot such as they are often shown in movies.

A robot is a machine or a computer program which seems to have a life of its own. They can come in many forms.[1]

Many people think that a robot:

There are many books, movies, and video games with robots in them.

People have been interested in building machines to do work for us for a long time. But it takes time and money to build just one machine, so early ideas stayed ideas, or were built to make rich people laugh. Leonardo da Vinci designed a man-shaped machine to look like a knight in 1464. It would be controlled with ropes and wheels. Other engineers and dreamers drew mechanical men. So in 1920, Karel Čapek wrote a novel about them, and he used a word from Czech that is connected with 'work': robot. But the most successful robot designs in the 1900s were not made to look like people. They were designed for their use. George Devol made the first of these, the Unimate, in 1954, and General Motors bought it in 1960. The next year, it started work in a factory in New Jersey. The engineers could program it, and reprogram it if they had to.

Robots now have many uses. Many factories use robots to do lots of hard work quickly and without many mistakes. These are 'industrial' robots. The military uses robots to find and get rid of bombs. If someone makes a mistake, the robot is damaged or destroyed, which is better than a person being killed. There are also robots that help at home, to vacuum or cut grass, for example. Such robots must learn about the area of work. There are two robots on Mars. Because it takes a long time to send a signal from Earth to Mars, the robots do much of their work alone, without commands from Earth. People still think of robots as having a shape like a person—two legs, two arms, and a head. ASIMO is one robot that is helping scientists learn how to design and program robots. It can walk, which is not easy to program.

In Japan and South Korea, ideas of future robots have been mainly positive. The positive reception of robots there may be partly because of the famous cartoon robot, 'Astroboy'. China expressed views on robotics that are similar to those of Japan and South Korea, but China is behind both America and Europe in robotic development. The East Asian view is that robots should be roughly equal to humans. They feel robots could care for old people, teach children, or serve as assistants. The popular opinion of East Asia is that it would be good for robots to become more popular and more advanced. This view is opposite to the popular Western view.

"This is the opening of an era in which human beings and robots can co-exist," says Japanese firm Mitsubishi about one of the many human-like robots in Japan.[7] The South Korean Ministry of Information and Communication has predicted that every South Korean household will have a robot by between 2015 and 2020.

In this sense, people in Japan are much more likely to be affected by Technosexuality, as they are much more exposed to robots in their society. South Korea aims to put a robot in every house there by 2015-2020 in order to help catch up technologically with Japan.[8] This will obviously have an impact on the technosexuality of South Korea. China, like South Korea, wishes to catch up with Japan, and has been developing robots very quickly. After China becomes more developed, and each person has more money to view the media, where robots could be seen, or to buy robots, as is happening in Japan and South Korea, technosexuality will probably rise there too, when considering the current opinions of the people of robots.

Western societies are more likely to be against, or even fear the development of robots. Science fiction movies and other stories often show them as dangerous rebels against humanity.

The West regards robots as a 'threat' to the future of humans, which is also muchly due to religious influence of the Abrahamic religions, in which creating machines that can think for themselves would almost be playing God.[6][10] Obviously, these boundaries are not clear, but there is a significant difference between the two ideologies.

The writer Isaac Asimov told many stories about robots who had three robot laws to keep them safe, as well as to keep humans safe from them.

These were not used in real life when he invented them. However, in today's world robots are more complicated, and one day real laws may be needed, much like Isaac Asimov's original three laws.

These laws are talked about in the Megaman video games.

South Korea was the first country in the world to have laws about robots.[8][11]

Wikibooks has more about this subject:
Robotics