Students marching to the Wartburg in 1817 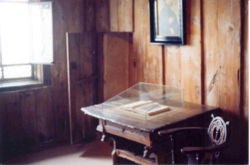 The Luther Room in the Wartburg Castle.

The Wartburg is a castle on a 1230-foot (410-m) cliff to the southwest of Eisenach, in the state of Thuringia, Germany. In 1999 UNESCO added Wartburg Castle to the World Heritage List as an "Outstanding Monument of the Feudal Period in Central Europe" because of its "Cultural Values of Universal Significance".[1]

The castle's foundation was laid in about 1068 by the Thuringian count of Schauenburg, Louis the Springer. He was a relative of the Counts of Rieneck in Franconia. Together with its larger sister castle Neuenberg in the present-day town of Freyburg, the Wartburg protected the borders of his territories.[2]

The castle (Burg in German) reportedly got its name when its founder first saw the hill where the castle now sits; he is supposed to have said, "Warte, Berg -- du sollst mir eine Burg tragen!" ("Wait, mountain -- you shall bear a castle for me!").[3] It is a German play on words for mountain (Berg) and fortress (Burg).

The Wartburg remained the seat of the Thuringian landgraves until 1440, and around 1207 it became the place of the Sängerkrieg, or Minstrels' Contest.[4] Later, Richard Wagner wrote the opera Tannhäuser about the contest.

At the age of four, St. Elisabeth of Hungary was sent by her mother to the Wartburg to be raised to become the wife of Ludwig IV of Thuringia. From 1211 to 1228, she lived there and did charitable work. When her husband died in 1227, she moved to Marburg. She died at the age of 24 and later was canonized (made a saint) by the Roman Catholic Church.[5]

From May 1521 until March 1522, Martin Luther stayed at the castle, after Frederick the Wise had him taken there for his safety. This was after Luther's excommunication by Pope Leo X and his refusal to give up his beliefs at the Diet of Worms. During this time, Luther translated the New Testament into German. It was not the first German translation of the Bible but it became the most well known and most used.

From 1540 until his death in 1548, Fritz Erbe, an Anabaptist farmer from Herda, was held as a prisoner in the dungeon of the south tower, because he refused to give up his beliefs. After his death, he was buried in the Wartburg near the chapel of St. Elisabeth.[6]

On 18 October 1817, the first Wartburg festival took place. About 450 students, members of the German Burschenschaften ("fraternities"), celebrated the German victory over Napoleon that happened four years before, condemned conservatism and called for German unity. Scraps of parchment with the titles of conservative books were burned, because the actual books were very expensive. This event and similar gatherings at Wartburg during the Revolutions of 1848 are considered important events in the movement for German unification.

The Castle has been restored many times. From 1952 to 1966, for example, the East German Government restored it to what it looked like in the 16th century.

The Romanesque Palas (Landgrafenhaus or Great Hall) is the oldest part of the buildings. Besides the chapel, it has the Sängersaal (Hall of the Minstrels) and the Festsaal (the Feast or Festival Hall), both of which have frescoes by Moritz von Schwind.

The castle gate behind the drawbridge is the only way to access the Castle, and it has remained exactly as it was when it was built.

The Knights' House on the western side of the drawbridge is from the 15th century. It is probably where the servants and guards lived.

For centuries, many people from Germany and from outside Germany have made pilgrimages to the Wartburg. They do this because of its significance in German history and in the development of Christianity. Several places (especially US towns founded by Lutherans) and a local brand of automobile have been named after the Wartburg. Wartburg College in Iowa, USA, is named after the Wartburg because Martin Luther received protection at the castle, and because of the college's Thuringian heritage.[7]