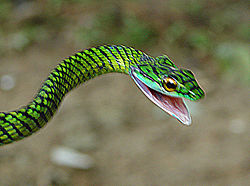 Venomous snake from the rainforest: the black-skinned parrotsnake 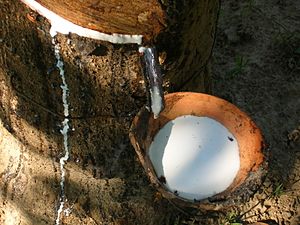 How people collect rubber from trees

The Amazon rainforest is the largest forest. It grows in the tropical basin of the Amazon River.

This region includes territory belonging to nine nations. Most of the forest is in Brazil, with 60% of the rainforest, followed by Peru with 13%, and Colombia with 10%. Venezuela, Ecuador, Bolivia, Guyana, Suriname and French Guiana have just a small amount of rainforest.[1]

The Amazon has over half of the planet's remaining rainforests. It is the largest and most species-rich tract of tropical rainforest in the world. The forest was formed at least 55 million years ago, in the Eocene period. 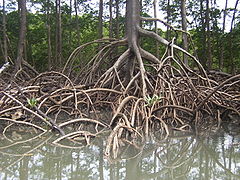 Aerial roots of red mangrove on an Amazonian river

More than one-third of all species in the world live in the Amazon rainforest.[2] It is the richest tropical forest in the world in terms of biodiversity.

The region is home to ~2.5 million insect species, tens of thousands of species of plants, and some 2000 species of birds and mammals and a similar number of fish.[3] The diversity of plant species is the highest on earth with some experts estimating that one square kilometre may contain over 75,000 types of trees and 150,000 species of higher plants.[4] One square kilometre of Amazon rainforest can have about 90,000 tons of living plants. This is the largest collection of living plants and animal species in the world. One in five of all the birds in the world live here. To date, an estimated 438,000 species of plants of economic and social interest have been registered in the region with many more remaining to be discovered or cataloged.

Amazonian forests as a store of carbon dioxide 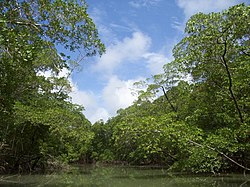 A river in the Amazon rainforest

More than one fifth of the Amazon rainforest has already been destroyed. The forest which remains is threatened. People who care for the environment warn about the loss of biodiversity. They also point out that releasing the carbon which is stored in the trees will increase global warming.

Environmentalists are concerned about loss of biodiversity due to the destruction of the forest, and about the release of the carbon in the vegetation, which would accelerate global warming. Amazonian evergreen forests account for about 10% of the world's productivity on land and 10% of the carbon stores in ecosystems[5]—of the order of 1.1 × 1011 metric tonnes of carbon.[6] Amazonian forests are estimated to have accumulated 0.62 ± 0.37 tons of carbon per hectare per year between 1975 and 1996.[6]

Some people have calculated that it may even pay to save the forest. They said that one hectare of Amazonian forest in Peru is worth about US $6280, if it is used to harvest fruits, latex and timber (wood). If all the wood is cut down for timber, it has a value of about US $1000. Obviously, this can only be done once; it is not sustainable. When the forest has been cleared, the hectar of land can be used as a pasture, and is worth about US $148. Not all people agree on the study; some have questioned the assumptions behind it.

The Brazilian Air Force has been using surveillance aircraft to monitor the forest. At a conference in 2004, scientists warned that the rainforest will no longer be able to absorb the millions of tons of greenhouse gases annually, as it usually does, because of the increased speed of rainforest destruction.

9,169 square miles of rain forest were cut down in 2003 alone. In Brazil alone, European colonists have destroyed more than 90 indigenous tribes since the 1900s. With them have gone centuries of knowledge of the medicinal value of rainforest species. As their homelands continue to be destroyed by deforestation, rainforest peoples are also disappearing.

Once the process of vulcanization was invented, companies began to make many kinds of new rubber products, such as boots and seals for machines. American and European companies began buying large amounts of latex from Brazil. This boom in Brazilian rubber began around 1870, but the need for automobile tires brought the greatest wealth to the new rubber producers.[7]

Other rain forest had rubber trees, but Amazonia had by far the best. However, the trees could not be farmed on plantations because if they were next to each other, the insects would eat them. Therefore, people had to find the trees in the rain forest, cut slits in them, leave cups to collect the latex, and come back later to get it.[7] Thousands of people moved to the rain forest to work collecting rubber. Most of these people were hired by rich rubber merchants. The rubber merchants loaned them money to come down the river and buy tools. Each merchant’s collectors had to sell the rubber only to their rubber merchant at low prices and buy supplies only from them at high prices. That meant the collectors were always in debt to their merchant and could not leave to do something else. The rubber merchants quickly became very rich.

The center of the rubber trade was Manaus on the Rio Negro.[7] It became first a boom town and then a beautiful, wealthy city. It had electricity before most of the cities in the United States did.[7] The newly rich merchants built huge expensive homes and brought in automobiles to travel on the city’s few roads. They built a magnificent opera house with crystal chandeliers and decorated tiles brought all the way from Europe.[7]

However, the rubber boom only lasted about forty years, ending by 1913.[7] Some men had taken the seeds of the Amazon rubber trees and began growing them in the Asian rain forests. The trees grew well there, and they could be grown on plantations. The insects that could destroy them were in South America. So the price of rubber began to fall, and the rubber boom stopped.[7]